GAF will never be corrupted or influenced by liars – CDS Bargie 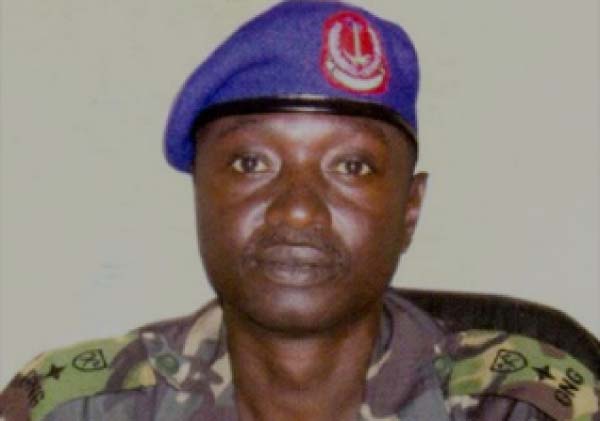 Gambia’s Chief of Defence Staff LT General Ousman Bargie has said the Gambia Armed Forces (GAF) would never be corrupted or influenced by liars and leaders who never wish The Gambia well.

CDS Bargie was speaking at July 22nd Square in Banjul during a solidarity march-past from the National Assembly Building to July 22nd Square by members of the country’s armed and security services.

The march was held for members of the armed and security services to renew their loyality to President Yahya Jammeh, following last Tuesday’s “terrorist attack” by Gambian dissidents abroad.

In addressing the armed and security services, CDS LT Bargie said the march was meant to send out a clear message of solidarity to President Yahya Jammeh, Commander-in-Chief of the Armed Forces, the government and people of The Gambia.

CDS Bargie said: “It is important we stand together in solidarity, committed to one another as Gambians and committed not to allow outside influence to fight us as a nation.

“Rather our unity and solidarity must be affirmed, as well as our commitment to peace and security and our responsibility to do our part to build a better Gambia and the world, as the custodian of peace and security in The Gambia.”

According to CDS Bargie, members of the armed and security services of The Gambia have as provided in the second republic constitution, not to compromise its sacred unity at any cost in safeguarding the territorial integrity of the republic of our dear Gambia.

“Together we stand against military aggression, occupation and colonisation… regardless of faith, origin, and sex; except lesbians and gays,” he said.

“Do not ever mistake Gambians’ silence or ignorance regardless of kindness or weakness. Behind the smiling faces are battle-hardened hungry lions. The Gambia armed forces and other security forces will always follow where the President leads and defend that which he represents; that is, the truth,” he said.

CDS Bargie said further that the armed forces and other security services had benefitted immensely under the leadership of President Jammeh who transformed the Gambia national army into one of the most motivated, highly trained and best equipped armies in Africa.

Dr Isatou Njie Saidy, Vice President and chairperson of the National Security Council, commended members of the armed and security forces for living up to expectations and successfully beating back “the terrorists”.

“I must express gratitude of the President to the gallant men and women of the armed and security forces for once again showing their loyalty and commitment to The Gambia, and the President and leadership of this country,” she said.

“Once again you have proven to the whole world that you are loyal and everybody outside this country says the armed and security officers are one of the best here and outside the country,” she told the army and security services.

VP Njie-Saidy spoke at length about the President’s never ending efforts to enhancing the welfare of Gambia’s security officers.

“I just want to assure you that the President and any genuine Gambian both here and outside the country, any genuine African, any human being will be behind you,” she added.

She told the army and security services that President Jammeh, though retired from the army, is always ready to lead them to defend the country whenever necessary.

“President Jammeh thanked you once again, and he always says as a former soldier he is always with you,” the Vice President told members of the armed and security services of The Gambia.