Gambia’s representative in CAF Champions League Real De Banjul FC were on Saturday eliminated from the competition despite beating their Moroccan opponents FUS Rabat 2-1 in the second leg of the preliminary round played at the Independence Stadium in Bakau.

Skipper Baboucarr Savage gave Real De Banjul the lead in the 60th minute of the game from a powerful deflected long-range shot but his goal was cancelled by Andre Ndame Ndame for FUS four minutes later from a scramble.

With ten minutes remaining on the clock, Baboucarr Savage scored a superb header for Real De Banjul to register his name twice on the score sheet but it was not enough to guarantee his side a place in the next stage of the competition as the first leg was 1-0 in favour of FUS Rabat, who have advanced to the second round owing to their away goal.

Speaking to reporters shortly after the game at a press conference, Alagie Sarr, head coach of Real De Banjul, said they played very well but were unlucky to score the required goals to advance to the next stage of the competition.

He also said they will now concentrate on the league to be able to win it again, so they could again take part in the competition next year.

He stated that he did not regret their approach towards the game in Morocco even though their aim towards that game was to avoid conceding a goal.

He added that most of his players are young and lack experience, which could be a reason for them conceding a goal in Morocco, saying in Morocco they were playing more of counter-attack football.

He and the management of the club were pleased with the players, he said, adding that the fans even appreciated the players because even though they were eliminated the fans were cheering them up after the game.

He also said he was not disappointed with his strikers - a midfielder scoring a brace - because the strikers are new players in the team.

“We just need to work hard on them because they only played five games in the league,” said Coach Sarr.

The goal they conceded was a mistake, he noted, saying a lot of things happened during the scramble as his goalkeeper was challenged and also a FUS player handled the ball, but said he would not blame the referee and run away from his responsibility.

He remarked further that their target was to reach the group stages but since that has not happened, they would fight to win the league and probably do it next year, or maybe he would do it with another team as he loves coaching.

Jammal Sallam, head coach of FUS Rabat, said Real De Banjul played very good football, adding that he was surprised at the quality of players Real have in their team.

Sallam, who was full of praises for Real, added that it was a pleasure for them to play with such a team full of young talents and skillful players.

He said: “They [Real De Banjul] don’t have to feel ashamed about their performance; maybe we are just more experienced than them because we have good players including international players.”

Sallam also heaped praises on Yusupha Njie, Bubacarr Trawally and Baboucarr Savage and wished them success in their career.

“Real De Banjul FC players gave us a lot of difficulties but I think we had an edge over them because we are more physical,” he said.

The Moroccan coach also said they explored Real’s defence line and managed to have an away goal.

The pitch did not favour both teams, which resulted in both teams not being able to play very good football, the Moroccan coach observed, saying the first goal they conceded was too cheap.

In another encounter, Gamtel defeated HLM of Senegal 3-1 in Senegal to proceed to the next stage of the qualifiers.

In the first leg in Banjul, Gamtel beat 2-1 earning them the advantage in both legs in the Confederation Cup. 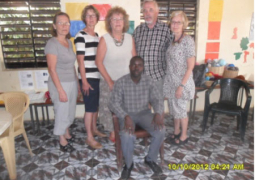