Prisca, a musical band from is in the country to set stage a day's earth-trembling gig in the smiling coast of . The French musical band recently treated party-people at the main bowl of the Alliance Franco Hall. The young and larger-than-life French musical band team left the audience open-mouthed during the live concert.

In a brief chat with this reporter, Mr. Mahfoud Bettayeb, the band vocalist, said their coming to The Gambia is part of their annual activities to perform live concerts in African countries. Mr. Mafoud told this reporter that since the formation of Prisca Band a few years ago, they had produced two studio albums and one live concert album. According to him, their fourth album will be the combination of his band and Kambeng Band of The Gambia. He said that his band plays mainly French music, but blending it with the Gambian traditional Kora flavour would be very appealing.

For his part, Mr. Ebrima Jobarteh, head of the Kambeng Band, explained that through the director of the Alliance Franco-Gambia, he came to draw up a contract with the Prisca band. Mr. Jobarteh revealed that his band was formed in 1994 and the band was able to launch two albums. The Kambeng band boss said for the past 15 years was collaborating with many musicians worldwide and had been attending the African instrument exhibition Olympic.

In his brief contribution, Mr. Pascal Rezzouk, director of Alliance Franco-Gambia, outlined that Alliance Franco is here to assist Gambian artists as well as promote traditional norms by working conscientiously with local bands. 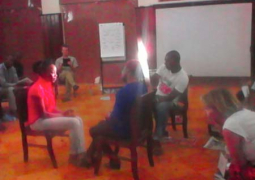