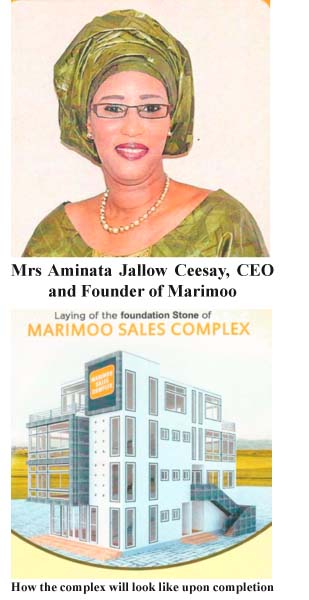 The laying of the foundation stone of the building complex is part of activities marking the 21st Anniversary of the July 22nd Revolution.

The complex would include a mosque with a female wing and a waiting room for drivers.

In his keynote address, Secretary General Nyabally said the laying of the foundation stone is an essential element in “our collaborative drive to achieve the milestone of our various national blueprints and shaping the path to progress, prosperity and sustainable development”.

He acknowledged the importance and relevance of the project in the realisation of the aspiration of the government in building a vibrant private partnership and, most importantly, promoting women’s participation in economic development.

He applauded the efforts, dedication and commitment undertaken by the proprietress for the realisation of the project.

He pointed out that the project could be a great inspiration for many young people, that someone needs not go to the West (Europe and America) to make it in life or be educated, and to be creative thinkers.

Since 1994 to date, President Jammeh has always advocated for an open door policy for Gambian men and women to venture in all sectors of the economy, he said.

But as of now, almost 60 per cent of small and medium size enterprises (SMEs) are owned by non-Gambians, with 70-80 per cent of ICT equipment imported, he went on.

He, therefore, challenged the private sector to invest in science and innovation to curb the economic imbalance.

Secretary General Nyabally informed Gambian entrepreneurs that Jammeh’s Government would continue to promote private sector-led economic development and would do all what it could take to ensure strong measures are in place to stimulate public private partnership in all spheres of development.

“As we continue to take giant strides in pursuance of reform in the Information and Technology sector, I wish to urge the continued collaboration of the private sector to partner with government in developing this sector,” he said.

He called on the young and vibrant minds to strike a new path, forge ahead with a new spirit of service and patriotism.

He thanked the management and staff of all the GSM companies in the country and urged them to continue to exercise their corporate social responsibility to invest in science and innovation, which would help in making The Gambia regain its strategic position as a hub of information communication technology in the world.

Hon. Sheriff Bojang, Minister of Information and Communication Infrastructure, in his remarks, described the laying of the foundation as another significant achievement in the country’s ICT sector.

Minister Bojang described President Jammeh as the “Jaliba” of the women of The Gambia as wherever he goes and whenever he speaks, he praises and encourages them to seize the day.

The advent of the GSM business has created opportunities for employment and entrepreneurship development in The Gambia, he noted, adding that the GSM and ISP industry has created, from 2001 to date, thousands of jobs for people, both directly and indirectly, and generated billions of dalasi for the economy.

For her part, Mrs Aminata Jallow-Ceesay, founder and CEO of Marimoo, her journey did not start today but was inspired by President Jammeh who is the champion of women’s empowerment.

Madam Jallow-Ceesay thanked the management and staff of Africell, her family, husband and friends, as well as her staff, for supporting her.

She also thanked President Jammeh for creating the enabling environment for making sure the voice of women is heard, saying “his leadership is worth emulating”.

Other speakers on the occasion included Papa Leigh, Director of Public Relations at Africell, Mr Barry, who deputised for the managing director of Africell, and Mayor of KMC Yankuba Colley.