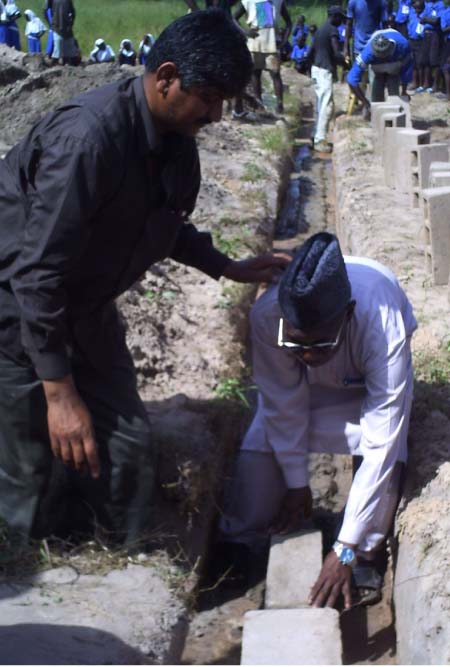 In his keynote address, Secretary Sonko said that the construction of the nine-bedroom block is funded by the Ahmadiyya Muslim Jamaat in The Gambia, as part of its contribution in complementing government’s effort at providing and bringing quality education to the doorsteps of all Gambians.

He advised teachers, parents and the School Management Committee (SMC), to cooperate and work hard towards achieving their goal.

The success of a school is not achieved by putting up beautiful and well decorated buildings but through hard work of both teachers and students with the full cooperation of parents and other stakeholders, he said.

He also advised members of the Mothers’ Club through their chairperson that all their activities should be geared towards helping students of the school in their educational pursuit.

In his vote of thanks, the Alkalo of Kanfenda village, Lamin Bojang, on behalf of the community, thanked the Ahmadiyya Muslim Jamaat for their contribution to national development, especially in education and health.

He also prayed for the Jamaat and for the progress of the school.

The vice chairman of the SMC and the Chairperson of the Mothers’ Club also echoed the similar sentiments.

The ceremony was attended by the Area Missionary of Foni Region, Imam Ousman K. Bah; the regional president of Ahmadiyya Muslim Jama’at, Foni Region, Mr Pa Dawda Bojang; a representative of the district chief; Alkalolou; Imams; the school head master Bakary Kujabi; staff and students, vice chairman of the SMC; chairperson of the Mothers’ Club, and a cross-section of the community.