Testifying as the first prosecution witness, Omar Sarr told the court that he resides at Brusubi, and that he recognized the accused person as the former managing director of SSHFC.

Sarr said he is the General Manager of Home Finance Company (Gambia Limited), which has two shareholders with 90 percent of its capital owned by the SSFHC, while Trust Bank Gambia Limited owned 10 percent.

He told the court that, as the General Manager, during one of their board meetings, he informed Pa Njie, the chairman, that one Paul J. Bahoum’s contract would soon end, and they needed a replacement for the position.

A few days later, the witness continued, the accused person called him to inform him that there was a person, by the name Ancha Jammeh, who was coming to his office to submit her application for the position.

Sarr identified the application papers of Ancha Jammeh submitted to his office, which were tendered and admitted as an exhibit.

Sarr further said that Ancha Jammeh was not a staff member of the SSFHC, as agreed during the board meeting.

“I went through the application and realized that the applicant had a Bachelors degree in Economics. I contacted Paul J. Bahoum, former occupant of the position for advice, and Paul told me that the applicant was not qualified, but the accused person insisted that we proceed, and interview her,” the witness told the court.

He adduced that, after the interview, it took him time to write to Ancha Jammeh to come for the new job, adding that the accused later called him and asked him whether he wrote to the applicant.

The witness further told the court that, after the appointment of Ancha Jammeh, the accused asked them to retain Paul J. Bahoum for two months to train Ancha before he would leave, and that the Home Finance Company should pay him D25, 000 each month.

Still testifying, he told the court that before the two months ended, Paul wrote to him and copied to the accused, stating that he could no longer train somebody who did not know much in Accounting.

Sarr told the court that the accused person still insisted that the position should be offered to Ancha Jammeh, and then later proposed to him that the Home Finance Company hires someone who would train Ancha Jammeh.

“I was assigned to contact someone who charged the company D73, 000, which the Home Finance Company paid,” he added.

“I told the accused person that the best thing we could do was to advertise the position, so that we would have qualified applicants and there would be no need for training, because the cost was expensive, but the accused insisted that we offer the position to Ancha Jammeh” he continued.

The case was at that juncture adjourned till 30th May 2011, for cross-examination. 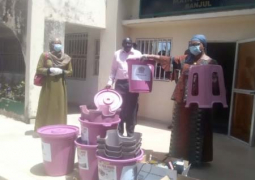