Awa Saye Touray, a former official at the Ministry of Agriculture, who was recently arraigned at the Banjul Magistrates Court along with other former officials of the same ministry and subsequently remanded in custody at the State Central Prison Mile 2, yesterday filed a bail application at the high court in .

It would be recalled that Awa Saye Touray along with former permanent secretaries at the Ministry of Agriculture were charged with economic crimes, among others.

When the case was called, defence counsel Yassin Senghore told the court that the motion dated 23 March 2012 was seeking the release on bail of the applicant from remand custody.

She added that the offences allegedly committed were bailable.

Counsel further submitted that the prosecution had failed to show the court why the accused person should not be granted bail.

He added that the case file was handed over to him barely a few hours ago, and they needed to put heads together with the investigating officers.

“My learned friend had served us on Tuesday very late near closing hours, when she should serve us at least 48 hours, as stated in the laws of the Gambia”, he added.

He said that the state had filed a counter affidavit in support of their case, and urged the court to adjourn the case to today to enable the state to respond.

Defence counsel Yassin Senghore said she was opposed to any further adjournment, but she was overruled by the judge, Justice Edrissa Fafa Mbai, who adjourned the case till today. 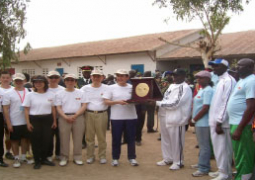