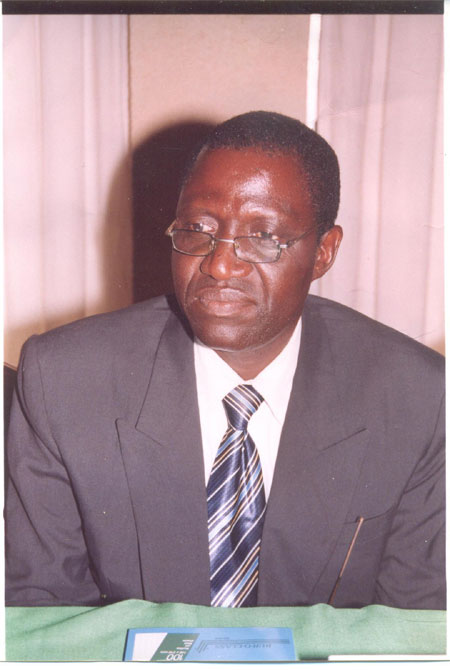 Mr Abdoulie Alpha Sanneh, Director of Forestry at the Ministry of Forestry and the Environment, passed away on the evening of Thursday 5th April 2012 after having been admitted at the Royal Victoria Teaching Hospital in Banjul a week ago.

Thousands of people, including top government officials, flocked to Sanneh’s Brikama residence, after he was laid to rest at the Brikama cemetery on Friday 6th April.

Married with many children, the late Abdoulie Sanneh was born on 18th February 1960 in Wassadu, Foni Jarrol in the West Coast Region.

In November 1979 he was employed at the Department of Forestry as a Forest Guard Trainee attached to Inspectorates Unit in Upper River Division (now Upper River Region) until August 1980.

Thanks to his hard work, commitment and love for his job and country, he served in various positions within the Department of Forestry throughout his career. His diligence, determination and discipline saw him promoted to the admirable position of Director of Forestry.

In April 1981 he enrolled at Man O’ War Bay College in Nigeria where he gained a Certificate in Citizenship and Leadership.

In April 1982 he attended the School of Forestry at the Forestry Research Institute of Nigeria, obtaining an Ordinary Diploma in General Forestry.

From April 1982 to December 1984 he served as Assistant Divisional Forest Officer in Charge of Natural Forest Management, Protecting, Afforestation and Administration of all Forestry matters in Upper River Region. From January 1985 to September 1987 he was Plantation Officer in Charge of the Fintomanereg and Salagi forest plantations.

In July 1989 he returned to Nigeria to complete a Higher National Diploma (HND) in General Forestry at the Federal College of Forestry.

From August 1989 to September 1990 he held the position of Forestry Superintendent Supervising Plantations. From September 1990 to May 1994 he was Divisional Forestry Officer in Charge of Natural Forest Management, Protection, Afforestation and Administration of all Forestry matters in Central River Division.

He then continued his educational and professional development at the University of Philippines where he obtained a Certificate in Values Education and Leadership in 1996 and thereafter a BSc Degree in Forestry in 1998.

Upon returning to The Gambia, he was made the Divisional Forestry Officer in Charge of Natural Forest Management, Protection, Afforestation (Upper River Division Forestry Project) which was considered a success. His responsibilities in this role included saw milling and the administration of all forestry matters in Upper River Division.

From January 2001 to January 2003, Abdoulie Alpha Sanneh held the position of Senior Forestry Officer and Technical Unit Head at the Department of Forestry, at the same time providing support to all Divisional Forestry Officers in the country among other matters.

From January 2003 to September 2005 he held the position of Senior Forestry Officer and Monitoring and Evaluation Unit Head at the Department of Forestry.

In 2007 Mr Sanneh continued his educational and professional studies at Dr. Yashwant Singh Parmar University of Horticulture and Forestry, India. He graduated with an MSc Degree in Agro-Forestry.

Many spoke at the burial, including the Minister of Fisheries and Water Resources, Mr Abdou Kolley, the Permanent Secretary at the Ministry of Forestry, Mr Kebba Sonko, and the Regional Forestry Officer for West Coast Region, Mr Ousainou Cham. They all described the late Sanneh as an asset not only to The Gambia but also the African continent.

A well-respected figure at the Department of Forestry, Mr Abdoulie Alpha Sanneh’s name will remain in the history books of this country as a man whose immense contribution to nation building earned him critical acclaim both in The Gambia and beyond.