A delegation from Young Men's Christian Association (YMCA) of is on a two-week visit to the country to monitor the association's TAKKU LEGGEY funded projects being implemented by the Gambia YMCA.

The TAAKU LEGGEY project is a three-year funded project being implemented by the Gambia YMCA for young people, according to officials of the YMCA.

Speaking to this reporter in an interview last Saturday at the YMCA main office in Kanifing, Jaakko Koikkalainen, the National Secretary of Finland YMCA, said they established a cooperation pack with their counterparts in 1979, adding that they are also among the initiators who established the Gambia YMCA.

He also said they have come to observe their project in The Gambia funded by their Ministry of Foreign Affairs.

He said that prior to the current project in the country, they have also helped in some health projects such as HIV/AIDS and Malaria.

He said he was delighted about the YMCA The Gambia projects, which he described  as "very successful". "It has helped young people to acquire vocational training and engage in businesses in The Gambia," he said.

Speaking to The Point, Matti Vainio, Chairman of Tampere, says Tampere is a local YMCA organisation in Finland that also takes part in the TAKKU LEGGEY project in The Gambia.

He added that the project undertaken by their national board "is very vital, thus it aims at educating the youth to take up business in The Gambia".

For his part, Jaakko Lindgren, national board member of the YMCA Finland, says they intend to continue with the project after the current three-year phase.

Joseph Peacock of YMCA The Gambia described the relationship between their counterparts as very outstanding.

Since the inception of the project, every year the Finish YMCA comes with youths to learn about the country and share their experience with friends in , he says,

The project aims at helping the youth to acquire skills that would earn them lucrative jobs. 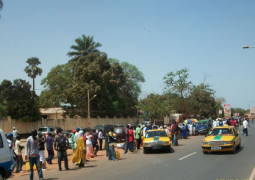 Nothing is for free!