The adjournment debate during the third meeting of the National Assembly in the 2011 legislative year began on Wednesday with deputies debating a number of issues, including the ferry service in and Barra.

The adjournment debate avails deputies the chance to dilate on pertinent issues of concern to their constituents and the nation as a whole.

First to start on the issue of the ferry services was Hon. Cherno Cham, member for Lower Niumi, who expressed worry about the daily scrambling at the Barra and ferry crossing points.

“We welcome the arrival of the two new ferries in our waters, but if you want development, there must be a feasibility study like the availability of spare parts, crossing points for the ferries, and regular maintenance of the ferries as well,” Hon. Cham stated.

According to him, the authorities concerned should ensure that the passengers using the ferries plying between and Barra are not scrambling to board. He went on to deplore the present condition of the Kanilai ferry, adding that, at the moment, water enters the ferry as it moves in the river.

“This ferry came into this country with four machines, but now the ferry is having only two engines,” he stated, while calling on the authorities to rescue the Niuminkas, Badibunkas and other passengers that cross with the ferries from what he called an unforeseen situation.

In contributing to the debate, Hon. Yerro Mballow, member for Lower Fulladu East, called on politicians in the country, ahead of the forthcoming presidential polls, not to engage in campaign of character assassination.

“We should not utter foul words against each other during the campaign period, but instead, what we should do is to start and end our campaign in the most civilize way for the betterment of the Gambia and its people,” he stated.

Hon. Baboucarr Nyang, member for Banjul South, complained about what he said was the bad state of some roads in . He appealed to the authorities to find a suitable car park for trucks within instead of allowing them to park in front of compound gates.

Hon. Mam Cherno Jallow, member for , lamented what he called the failure in the implementation of the anti-littering and anti-smoking Acts, and the use of mobile phones while driving. 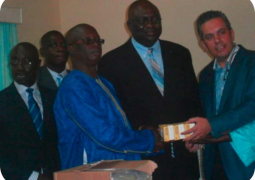