The Food and Agriculture Organisation of the United Nations (FAO) is providing technical assistance to the Ministry of Agriculture, through TCP project on the support for the National Horticultural Sector Master Plan (NHSMP).

Technical Cooperation Programme (TCP) is one of FAO’s tools for contributing to the achievement of the UN MDGs, particularly the goal of eradicating extreme poverty and hunger.

As part of its support to the Ministry of agriculture, FAO on Wednesday held a daylong inception workshop at KHAMSYS, in Bijilo.

Delivering his opening statement, on behalf of the Minister of Agriculture, Alphu Marong, the Permanent Secretary at the Ministry of Agriculture, said the NHSMP will be promised on the Gambia National Agricultural Investment Plan 2011-2015, GNAIP and the Programme for Accelerated Growth and Employment, PAGE.

According to him, these are medium-term strategic plan of the Government of The Gambia towards achieving the vision for the agriculture and natural resources development.

“Horticulture is an important source of income for employment and is an entry point for improving food and nutritional security in The Gambia, especially in rural areas,” he stated.

Marong noted that among women farmers, it’s a dynamic sub-sector of agriculture which increasingly attracts attention from the government, development agencies and private sector investment.

Mr Marong explained that horticulture is very important in the socio-economic development of the country, as it constitutes a good percent of the GDP, and it is perhaps the main source of income for the women folk.

PS Marong stated that the national horticultural sector master plan will emphasise a holistic value chain approach, focusing on women and youth farmers on the production side and fostering sustainable linkages with existing national, regional and international markets for traditional horticultural products, among others.

Mrs Mariatou-Njie, speaking on behalf of Dr. Babagana Ahmadu, FAO Representative in The Gambia said the proposed horticulture master plan will provide finer articulation of the horticulture sector of the Agricultural Policy and Medium-Term Strategic Plan for The Gambia.

Madam Njie further explained that horticultural production is rapidly emerging as one of the key growth areas of the Gambian economy.

“The sector currently contributes about 4 percent to GDP on average, and over 65 percent of the agricultural labour force is involved in the sector,” she said.

According to her, this is presently an established key source of rural income, employment and food, making significant contribution to food security and poverty alleviation.

She said nearly 88 percent of all women farmers in The Gambia are estimated to be engaged in individual or communal horticultural activities, which she added, include the growing of perennial crops.

She added that most of the vegetables are grown in the dry season, November to June with limited yield and regard for quality.

“Over the last few years, tremendous improvement in horticultural production in the country has been achieved. A wide variety of high value tropical and off fresh fruits and vegetables are now grown in The Gambia for both the domestic or tourist and export markets.”

Musa Human, the Director-General of the Department of Agriculture, said the purpose of the workshop was to create awareness and inform all stakeholders and collaborators on the development and implementation of the National Horticulture Sector Master plan.

The horticulture sub-sector has been expanding fast in recent years, and is becoming an increasingly important source of income and employment for the farmers and other actors in the value chain, he said.

He said the sector is attracting a lot of attention from the government, development partners, donor agencies, merchants and individuals, because of its great potential to increase overall agricultural production and productivity, increase income and household food and nutritional security, among others. 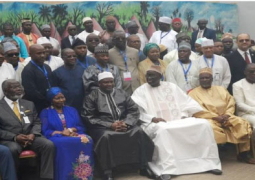