The alleged false information case involving Landing Jadama and 11 others was recently rescheduled to 4th August 2010, at Banjul Magistrates' Court before Magistrate Hilary U Abeke.

When the case was called recently all the 12 accused persons were present in court, but their counsel, Lawyer L.K Mboge and Lawyer Kebba Sanyang were said to have written to the court, stating that they are busy at the high court and then asked for a stand-down of the case which was subsequently granted.

But before the case was stood-down the prosecuting officer Inspector Keita told the court that the prosecution wanted to proceed with their first witness who is in court.

However, the presiding magistrate told the prosecuting officer that hence the defence counsel had written to the court indicating that they are engaged at the high court the court will give them the benefits of the doubt.

The prosecuting officer, Inspector Keita again told the magistrate that he wanted to be on records for his presence in court. However, the case could not proceed as expected.

It would be recalled that the 12 accused persons, namely Landing Jadama and eleven others, sometimes in the month of May 2010, in the city of Banjul allegedly presented a petition to the Office of the President, through the Secretary-General, stating that the demolished exercise for the erected building and fences at old Yundum Coastal Layout by the Department of Physical Planning was illegal and forcefully done, which information they knew was false. 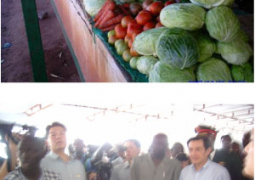