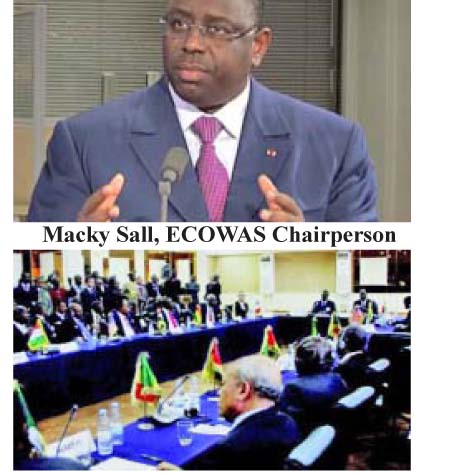 The extraordinary summit of heads of state and government of the Economic Community of West African States (ECOWAS), which took place in Dakar on Saturday, discussed, among other things, the political and security situation facing the region.

High on the agenda during the summit was terrorism and the general elections scheduled for October in the three member countries of Burkina Faso, Cote d’Ivoire and Guinea.

Speaking at the opening session, the Senegalese head of state and current chairman of Ecowas, Macky Sall, highlighted the major challenges facing the region and the efforts being taken to resolve them.

President Sall appealed to Burkina Faso, Cote d’Ivoire and Guinea to ensure that their presidential elections scheduled for October were held in a peaceful atmosphere.

“The conduct of a peaceful and transparent electoral process also remains an important issue for the preservation of peace and stability in our community,” said President Sall.

In his opening remarks, the President of ECOWAS Commission, Kadré Désiré Ouédrago, welcomed the ongoing efforts in member countries to solve the constitutional crisis in Guinea Bissau.

“I commend Presidents Alpha Conde of Guinea, Yahya Jammeh of The Gambia and Muhammadu Buhari of Nigeria for the steps they have taken with the Guinea Bissau authorities to help resolve the dispute”, Mr. Ouédrago said.

He expressed optimism about the peaceful resolution of the crisis, based on the goodwill of the political actors in Guinea-Bissau.

Ouedraogo also welcomed the “peaceful manner” in which elections were held in March and April respectively in Nigeria and Togo.

He, therefore, appealed to the authorities in Côte d’Ivoire, Burkina Faso and Guinea to ensure that the presidential elections to be held in October are “transparent and credible and the results accepted by all.”

Among other things, Mr. Ouédrago also spoke on such regional challenges like the Ebola virus disease, the crisis in northern Mali and the phenomenon of illegal migration.

The summit which ended with recommendations to resolve the pressing regional challenges was attended by heads of state of only eight of the 15 member countries.