Former Nianija NAM Dawda Manneh, and Demba Baldeh, are standing trial on charges of being in possession of drugs for the purpose of trafficking it as well as conspiracy. They were alleged to have conspired to traffic 9 kilograms and 260 grams of suspected drug (cannabis). They denied the charges.

Testifying Sgt Babucarr Corr, a narcotic officer, told the court that he recognised the 1st accused Dawda Manneh. He said on 15th September 2008 he left Tallinding police station to the NDEA headquarter in Banjul to hand over a case file. He added that after handing over the case file he was called by the NDEA operational commander Commissioner Ousman Sanneh. He revealed that Commissioner Ousman Sanneh gave him a cautionary and voluntary statement and asked him to assist in obtaining the statements from the 1st accused Dawda Manneh. 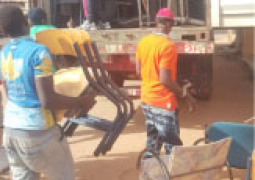