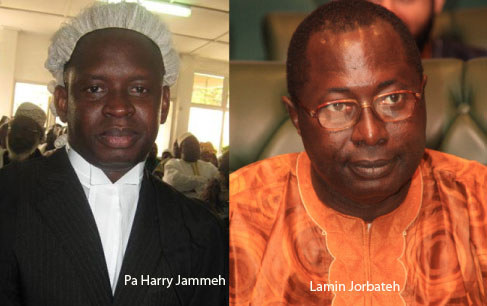 Former Attorney General and Minister of Justice and the ex-solicitor general and legal secretary were yesterday arraigned before the Banjul Magistrates’ Court charged with ten counts, including conspiracy to defeat justice, official corruption, negligence of official duties, abuse of office and destroying evidence.

The two, who were first arrested on 22nd May and detained, denied the charges.

On count one, Lamin AMS Jobarteh and Pa Harry Jammeh were charged that in the month of February 2013, they conspired to defeat justice when they jointly forced Joseph Wowo, then acting Chief Justice of The Gambia, to leave the country in a move to drop or suppress criminal charges against Mrs Amie Bensouda and other staff of the judiciary.

On count two, Jobarteh and Pa Harry are accused of jointly forcing Joseph Wowo, then acting Chief Justice of The Gambia, in an arbitrary act prejudicial to his right, to leave the country in a move to drop or suppress criminal charges against Mrs Amie Bensouda and other staff of the judiciary.

On count three, prosecutors accused Lamin Jobarteh of corruptly soliciting and receiving in the year 2012, three heads of cattle from the people of Chedoyel in the Central River Region in return for the cattle track he helped secure for them by virtue of his office.

Jobarteh also faces the charge in count five that in the year 2012 in Bansang in the Central River Region, he abused his office as minister of Justice by removing the community tap situated near his newly-bought compound at Bantaba town in Bansang to unlawfully extend his compound, an arbitrary act to the rights of the people of Bansang.

On count seven, Jobarteh faces the charge that in abuse of his office as a high court judge in 2012 in Toubanding village in the Central River Region, he directed the arrest of Mr Mustapha Kanyi after having problems over land he seized from him, an arbitrary act prejudicial to the rights of Mustapha Kanyi.

Pa Harry Jammeh also stands accused on count eight that in the year 2009, while serving as the Sheriff of the High Court, he destroyed unspecified amounts of cannabis and bullet exhibits from the Mansakonko and Basse Magistrate Courts without authority and due regard to possible appeals that could arise from the decisions related to the said exhibits.

On count nine, prosecutors accused Pa Harry Jammeh of destroying an unspecified amount of cannabis and bullet exhibits from the Mansakonko and Basse Magistrate Courts without authority and due regard to Section 95 of the Drug Control Act 2009.

On count ten, Pa Harry Jammeh faces the charge that in the year 2009, having been transferred from the Sheriff’s Division of the Gambia High Court where he was the Sheriff, to the Ministry of Justice as legal secretary and solicitor general, neglected his official duty to formally hand over the office of the Sheriff to his successor.

Defence counsel E. Jah, in his bail application, told the court that the offences the accused persons were charged with are bailable offence, noting that the charge before the court was a misdemeanor not a felony.

The constitution had empowered the accused persons to be granted bail, counsel added.

He pointed out that the accused persons are all responsible citizens who were occupying an executive positions, and they have their families here in the country and that they would never jump bail.

The accused persons had been under custody for 30 days without even access to their families, and they have enough sureties if they are granted bail, counsel further stated.

He revealed that the second accused person, Lamin Jobarteh, had collapsed twice while in state custody.

“The medical certificate is there to confirm that the accused person was not feeling OK while in detention,” he argued.

Counsel pointed out that the constitution states that any suspect or an accused person should not be detained for more than 72 hours without court appearance or be released on bail, but these particular accused persons spent 30 days in custody, which was against their constitutional rights.

Counsel further argued that the prosecution should show cause why the accused persons should not be granted bail, citing cases to support his argument.

He said the first accused person, Pa Harry Jammeh, was a magistrate prior to his appointment as solicitor general, with hard work and dedication for nearly a decade.

The second accused person, Lamin Jabarteh, was a High Court judge prior to his appointment as Minster for Justice and Attorney General, and they should be presumed innocent until proven guilty by a competent court.

“I therefore, urged the court to grant bail to the accused person, as the charges against them are a misdemeanour,” counsel stated.

In response, the police prosecutor, Superintendent Sainey Joof, told the court that the prosecution was objecting to granting the accused persons bail.

He added that the accused persons were all prominent figures in the society, and if grant bail, they are likely to jump bail.

The prosecution had experience in such cases where the accused person was granted bail, and he absconded from the jurisdiction, Joof went on, citing cases to support his argument.

He submitted that the accused persons might flee the country at any given time, if they are granted bail.

Prosecutor Joof said the defence counsel had mentioned that his client collapsed twice while in detention, but the counsel could not use that as yardstick to secure bail for the accused persons.

The prosecution strongly objected to granting bail to the accused persons, said the prosecutor.

Delivering his ruling, the trial magistrate told the court that he heard from both sides, and the charges for which the accused persons stand trial are bailable offences.

“I therefore deny the accused persons bail and remand them in prison custody, but they have the right to seek bail at the High Court of The Gambia,” the magistrate declared. 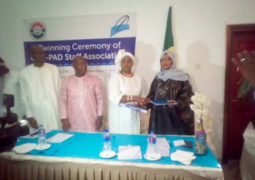