Ensa Badjie, the former police chief, yesterday told the Special Criminal Court presided over by Justice Ikpala that the allegations against him “are malicious and unfounded.”

“The allegations against me are malicious and unfounded,” Badjie said while continuing his testimony in the criminal trial involving him and chief superintendent of prison Ali Ceesay.

Badjie and Ceesay were indicted on several counts including robbery with violence, official corruption, offences relating to judicial proceedings, deceiving witness, aiding and abetting, among others.

He told the court that Soriba Condeh, the first prosecution witness, led them to different supermarkets, which had burglary, and that he later interviewed Condeh on their operations, adding that Condeh told him that he had a taxi in Latrikunda which he normally used when doing his operations, and also used it in the daytime as a commercial vehicle.

Badjie added that he instructed his officers to go and confiscate the said taxi, which according to him was still parked at the Serrekunda police station and was listed in the exhibits column of Soriba Condeh.

Still testifying, Badjie said that Condeh stated before the panel that he also had a motor cycle, and that the name he used in order to obtain a document for the motor cycle was Ebrima Camara, instead of Soriba Condeh.

“I took my phone and called Abdoulie Sowe, the Station Officer CID at Bakoteh Police Station and informed him to bring the said Ebrima Camara personally together with the motor cycle and the case file,” Badjie explained.

According to him, he also told Abdoulie Sowe to join the panel of investigators and developed the case file because Condeh informed him that he used Ebrima Camara instead of Soriba Condeh, and that the said motor cycle could be stolen property.

He explained that when Sowe brought the case file, he was not at the office, but he called Sowe to come to Serrekunda Police Station and complete the assignment he gave him. He told the court that he later instructed Sowe to charge Soriba for being in possession of stolen property.

Badjie further said that he wrote down everything, and photocopied it and gave his lawyer a copy for any emergency purpose, maintaining that his name was never mentioned in any of those statements that he was a conspirator.

“My lord, I have never called Abdoulie Sowe when he arrested Soriba Condeh, because I don’t know him before, and I was not aware of it,” the ex-police chief told the Special Criminal Court.

The witness adduced that Sowe had never informed him that he has Soriba Condeh in his custody. Badjie also denied the allegation that he had spoken to Fatou Jatou Mendy to go to Abdoulie Sowe and seek bail for Condeh.

According to him, while leaving for his house, he looked into Landing Bojang’s office and saw Soriba Condeh and Amadou Jallow there, while Landing was sitting in the office.

He added that he then asked Landing why he brought a trial prisoner into his office without his notice, and Landing, he added, told him that he was asking them about the whereabouts of the other accused persons, who were at large. He said Landing Bojang was supposed to be on the night patrols with the task force, so that they could locate the other suspects.

Badjie revealed that he then left for prayers, and was later called by one officer to go and answer to Amadou Jallow. He told the court that when he meet Amadou and Soriba Condeh, they told him that Landing took them to his office in order to implicate him (Ensa Badjie) for the crime that they have committed.

Badjie asserted that he called the concerned authorities and explained the matter to them. “When they arrived, the accused persons repeated the same thing, but Commissioner Ousman Gibba called Omar Gibba, then deputy chief of protocol, for him to forget everything because if the report was forwarded to the President, it would be detrimental to Landing Bojang,” Badjie further explained.

He stated that commissioner Gibba appealed to him not to further the matter to any department.

He further affirmed that the accused persons had informed him that if they implicate him, they would be used as witnesses against him.

Badjie then began to cry, but the trial judge told him to comport himself as befitting a police officer. 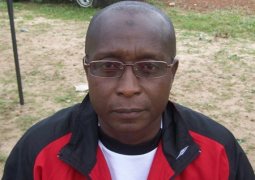