Mr. Lamin Waa Juwara's recently announced decision to defect to the APRC has many people talking. The leader of the opposition National Democratic Alliance Movement (NDAM) party declared his preparedness to join the APRC party last Sunday at a mass political rally held in the , Niamina West, Central River Region, as part of President Jammeh's Dialogue with the People tour.People will of course tend to have their own opinions with regard to the motivation behind the momentous decision, as is their right in a democracy where free speech and freedom of expression are the order of the day. Perhaps the most interesting comments have been made by Femi Peters, Campaign Manager of the main opposition United Democratic Party.

For his part Mr. Henry Gomez, leader of GPDP, had this to say: "I accepted Waa Juwara's opinion. He has the constitutional right to belong to any political party of his choice."

These comments show an extreme political maturity on the part of the opposition and bode well for the future democracy of The Gambia. It is well known that

Lamin Waa Juwara has long held the reputation for being among the most open and articulate critics of president Jammeh so there is no doubt he went through an enormous amount of soul searching before embarking on such a radical shift in his political outlook. To make a political U-turn of this magnitude in public is a brave thing in itself and for this Mr. Juwara must in some way be admired. Many people would rather drop out of politics altogether rather than be seen to so radically recant their deeply held political beliefs. To president Jammeh and the APRC we say well done on the effective horse trading it must have taken to land such a high profile scalp. To the opposition we say congratulations on your political maturity in accepting the defection and to Mr. Juwara we say best of luck in your new job as nominated councilor on the Brikama Area council. 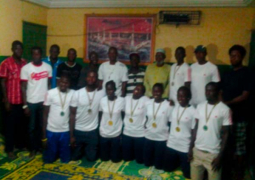