The untimely demise of Momodou Baboucar Njie has sent shockwaves throughout the length and breadth of this country and indeed in the whole of the region. I say because MB Njie was a figure whose stature covered both the and .

Doudou Njie was one of the prominent citizens of the capital city of . He was born in

Perseverance Street
, where he grew up under the tutelage of his grand father Pa Omar Secka, and the late father of Lamin Eli Secka

Njie attended 's Primary and Secondary schools during this time though very studious; he was not an excellent sportsman, unlike his brother the late Ma Ebou Njie

Married to Awa Loum, a teacher and devoted wife the two became the epitome of the ideal couple. With the untimely death of Awa, Njie was devastated and stayed for many years without remarrying. When he did, he married Yai Tut Njie and later Mariama Njie nee Eunson. He is survived by both wives.

He frequented Darra Barrow at Peel Street with the likes of Daddy Jobe, Sol Samba, Assan Faye, Omar Joof to name a few. Here he towered over most of the magi darras As a magi darra,( senior student) not only because of his intelligence but he was not counted among the brutal and bullying magi darra who derived pleasure in whipping the recalcitrant younger talibes like myself. He was an Adviser of the Association of Talibes of Darra Serign Barrow. His childhood friends were Tijan John, Doudou Bah, the late Ablie Jeng, and Badou Sinyan.

Doudou was a self made man. He started his working career as a clerk with the prominent Lawyer and politician Mr. Pierre Sarr Njie. He later joined the Compagnie Francaise d'Afrique Occidentale (CFAO), initially as a clerk and rose to be the head of the Stores Department, the first African ever to hold this position. While with CFAO, he picked up the job of Manager of the newly established British Petroleum Gambia (BP) and his name was synonymous with the company so much so that he earned the sobriquet Njie BP. As a Gambian head of one of the biggest companies, he built it into one of the most successful and efficiently run companies in the country. With the take over of BP by Elf, he steered the new company's affairs with his usual leadership style until his retirement

Known for his business acumen and management skills, it was just a matter of time before he was elected as the first indigenous Gambian to be Chairman of the Gambia Employers Association (Chamber of Commerce). The government of the day recognized his immense influence and ability and appointed him to serve on several Pam statal boards - the State Pensions Board ( precursor to the Social Security and Housing Finance Corporation), the National Trading Corporation (NTC), to name a few.

As Consul for he was prominent in the Diplomatic and Consular Corp and enhanced in no mean way the cordial relations between the and the .

He was always immaculately dressed whether his was wearing stylish Italian tailored suit or a grand boubou( waramba) made of brocade ( bazin) of the richest kind in subdued colours reflecting the man's simplicity, with his grey hair tucked into a well knit authentic hausa hat and displayed copiously on the sides all reminiscent of a hausa chief in northern Nigeria.

He was fluent in French which he learnt it all by himself through correspondence, lingua phone records and voracious reading of French books. He enjoyed speaking the language of De Gaulle and any time we met we would exchange niceties in that language.

AS for his relations with his fellow humans, He rose above religious bigotry and dogmatism I have never in my life come across a person who fitted in all circumstances and occasions - a man of all seasons.

As a well respected dignitary of , Doudou Njie played a key role in facilitating the then ruling party's control of the electorates. He was virtually the kingmaker in . As a key member of the Central Committee, he gained the respect and esteem of his colleagues and helped resolve several formidable crises within the Party.

He was made a Nominated Member of the House of Representatives and later was elected Speaker of the House. During his tenure, he was known for even handedness in his dealings with the government and opposition members of the House. His intense knowledge of House's procedures and Standing Orders was admiration of all in the House. He was an outstanding Speaker and imbued a high standard of debating among the Members. He was the Chancellor of the Order of the and was decorated with the insignia of Commander of the Order of the . He was also decorated by several countries including , and .

Doudou was iconic in the short lived confederation, in which he was the Speaker of the Confederal Parliament. Having served for many years as Speaker of the Gambian Parliament, he was always at ease and full of confidence in that position, I remember clearly the opening of the first session of the Confederal Parliament and how he conducted the business of the Parliament with brio and decorum to the admiration and esteem of both the Senegalese and Gambian parliamentarians. His historic speech echoing the yearning of the peoples to come together as one is as true today as it was then.

Doudou, without fanfare or ostentation, contributed immensely towards the development of Islam in this country. The mosques he has helped build are legion, the most prominent being the Pipeline Mosque of which he was one of the initiators... His contribution towards the procurement of the land on which the present mosque stands and the uncountable financial contributions he made towards its construction is indelibly written in the annals of the mosque. When in 1991 the Mosque Committee held its first commemorative Gamo, Doudou Njie was the natural and most obvious choice for Chief Patron. Until his demise, he held the position of Chief Adviser of the Mosque Committee. He was also a member of the Committee of Banjul Muslim Elders.

A couple of weeks before he died the Social and Welfare Committee of the Pipeline Mosque, led by Imam Fallou Joof, paid him the usual visit that the committee makes from time to time to sick and elderly members of our congregation. The Committee members came back to report that Njie Doudou showed great elation at seeing the members and left them in no doubt that he had accepted his illness in total supplication to Allah the Almighty.

It is common knowledge that Doudou had a broad and accommodating mind and attitude vis a vis other religious denominations. He regularly attends the concerts of Bati Linguere Catholic Choir He was a cherished Life Patron of this famous chorale. Doudou was a role model not only to his fellow Banjulians but to the country at large.

Anybody who happened to have had the good fortune to have any dealings with him would have benefited from his largesse and sagesse. The stories narrated at his funeral all point to the departure of a good man. As Serign Touba was quoted to have said, he has served Allah and kept peace with his fellow humans. This is why his funeral was an event never been seen in this country before - the lying in State, military last post at the cemetery where tens of thousands came to bid him last farewell.

Doudou was emblematic of the Saloum Saloum culture epitomized in the love of askan The expression of grief, dismay and utter sense of loss clearly visible at his residence among the members of his outer and immediate family alike is understandable. Doudou's entire life pivoted around his love of family. He knew and appreciated early the Godly obligation of looking after family in its wider sense and the family are better for it.

As far as I am concerned personally, I have interacted with Doudou Njie, since I was much younger, in all walks of life as his ndongo darra at Darra Serign Barrow, as a colleague the diplomatic service, in the Senegambia Secretariat, as Committee Member of the Pipeline Mosque and as my gorroh (I am married to his niece). Our orchards at Kembujeh are also adjacent to each other and we used to spend hours there together with Daddy Jobe who also had a garden nearby.. To say that he liked me would be a truism because he was everybody's friend, but I know that the potpourri of circumstances that link me with him make me fit to say that he was a good man and we all will miss him.

As Desiderata says "speak your truth quietly and listen to others, even the dull and ignorant, they too have their story ". Doudou had the rare gift of God to listen to everybody. And that is what makes him different from most.

May Allah in His bountiful mercy grant him the repose he so richly deserves. Amen ya Rabi 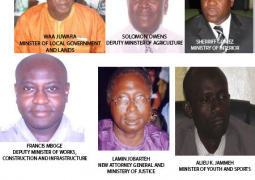