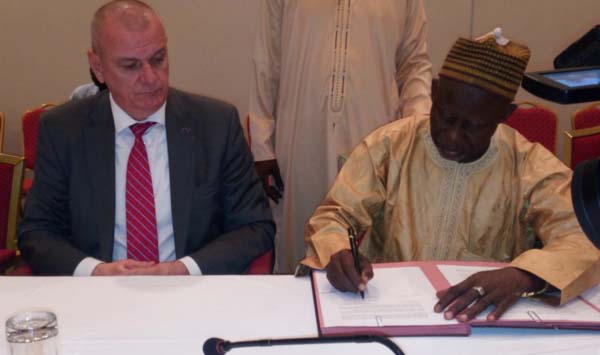 The Government of The Gambia and the European Union on Thursday signed a Memorandum of Understanding to facilitate an EU Election Observer Mission to The Gambia for the upcoming 2017 parliamentary elections.

Speaking at the ceremony, Ambassador Lajos said the signing is another milestone in the EU’s relations with The Gambia.  He said the EU has continued to support the democratization process of The Gambia.

According to him, the visit by the top EU diplomat to The Gambia in February 2017 was a symbolic event and shows the EU’s readiness to continue to support The Gambia.

“Today, what we signing is to enhance what we agreed on during the February visit of the EU Commissioner. This is the first time we will have a full fledge EU Observation Mission in The Gambia,” he said.

Ousainou Darboe, Minister of Foreign Affairs, International Cooperation and Gambians Abroad, who signed on behalf of the Gambia government, confirmed that since February 2017, the EU has gone big way in establishing engagements with The Gambia.

According to him, as a government, they are committed to ensuring a free, fair and credible election. “We don’t want to attest to our own election, but others should do it for us,” he said.

Minister Darboe assured that the Gambia government will give full and free access to the EU Observer Mission to monitor the parliamentary election.