A news release from the Office of the President aired over GRTS last evening has revealed that President Yahya Jammeh has removed Mrs. Sira Wally Ndow-Njie, the Minister of Energy of her cabinet appointment with effect from Monday 7th June 2010.

According to the release, Ousman Jammeh, the Minister of Foreign Affairs, International Relations and Gambians abroad has been reassigned as Minister of Energy.

"The Ministry of Higher Education, Research, Science and Technology has been transferred to the Office of the President," the release further stated.

Sira Wally Ndow-Njie, who was appointed as Minister in December 2009, was one time Deputy Managing Director of the National Water and Electricity Company (NAWEC). 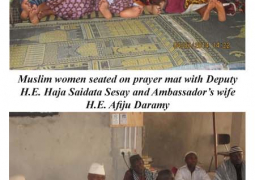