Former vice chairman of the then Armed Forces Provisional Ruling Council (AFPRC) Edward David Singhateh, yesterday appeared before the Truth, Reconciliation and Reparations Commission (TRRC), where he said that former president Yahya Jammeh was not recommended as a good soldier because he was not part of the infantry, saying Jammeh has ever been a coward.

Born on 8 August 1968 in the UK, Singhateh, was adversely mentioned for participating in several killings under the former president Yahya Jammeh.

“Jammeh is someone who will say I can do this or do that which he cannot or will never do. I know he will be insulting my mother if he is watching my testimony.”

The former AFPRC strongman indicated that he joined the army in 1991 as a Cadet Officer, when the army not confronted with many problems.

He said soldiers do protest at that time about unpaid allowances and other problems that they then disliked in the army.

The one-time vice chairman of the AFPRC confirmed that there has been tribalism in the army and there was also regional affiliation.

“The then government was downsizing the army and the food was bad. At that time, there were no toilets at the army headquarters and many used to have diarrhoea because of the rotten food.”

At a time, he went on, they knew that The Gambia deserved better in infrastructure, communication, health and education. “With that belief, we had a meeting as soldiers to overthrow the then government but we knew it was illegal,” he confessed.

On the plans of July 22, Singateh explained that he and Sana Sabally joined the group of soldiers complaining for the then system to go.

“We talked to Lt. Alpha Kinteh and Lt. Alagie Kanteh on the idea of overthrowing the then government. We thought about who can lead us and we approached Lt. Basiru Barrow. We had a meeting but later, so I decided to bring Yahya Jammeh but Basiru Barrow told me that Jammeh is arrogant and is a man who will say he can do this or that and he will never.”

Singateh said when Jammeh came in, Barrow resigned and only he, Sana and Jammeh were left.

“I talk to Yankuba Touray and Sadibou Hydara and they agreed to join us. Ndure Cham was brought in by Jammeh but he was a man who used to be afraid.”

He explained that their initial plan was to take over the State House; Jammeh and Sana wanted them to arrest the president at the airport but he told them that he was coming in a commercial flight and civilians will be there, so they had to cancel that plan.

He however said the operation could not be carried out due to lack of weapons because Jammeh was disarmed at the airport. He confirmed to the Commission that he burned the plan documents they drew to overthrow the then government after the coup. 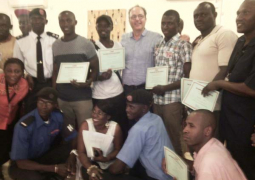 YMCA to organise National Forum on Youth in Micro Finance