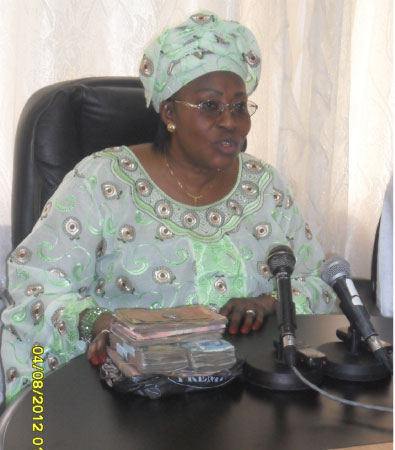 The Minister of Basic and Secondary Education (MoBSE), Fatou Lamin Faye, on Tuesday presented D30,532 to the Minister of Youth and Sports, Alieu K. Jammeh, at a ceremony held at the education minister’s office in Banjul.

The money was part of contribution from the entire student fraternity across the country towards the participation of The Gambia’s Under-17 Female team, who will take part in the upcoming tournament in Azerbaijan.

Speaking at the ceremony shortly before presenting the money to the Minister of Youth and Sports on behalf of the student body of the country, Hon. Faye said the money was meant for the senior male team but because of their poor performance her ministry decided to give it to the under-17 female team.

The under-17 female team is going to do what the senior team failed to do and the significance of this contribution is the fact that the contribution came from schoolchildren across the country.

Minister Faye said the contribution from the country’s future leaders should be an inspiration to everybody in The Gambia to support the under-17 female team, noting that as a former sportsperson she is not discouraged and she knows the girls can do well at Azerbaijan.

“Being a former sportsperson, I know that getting the resources to prepare yourself is very important too and with these two ingredients, if the public is able to provide both the moral and financial support required, I wouldn’t have any doubts in my mind that the Under 17 Female team will do what the Under 17 male team did in Peru by beating Brazil,” the education minister told the gathering.

Minister Faye thanked Musa Mendy for his role in coordinating the schoolchildren and their contribution throughout the country but she also called on the Gambians to continue giving their support to the Under-17 Female team and offer them prayers.

Speaking at the ceremony shortly before receiving the funds from the education minister, the Minister of Youth and Sports, Alieu K. Jammeh, thanked all those present at the ceremony in answering to the call by Minister Faye and her ministry.

“To me the amount is not very significant; what is symbolic is the efforts and the gesture that are put into this and more so coming from young boys and girls, and through Minister Faye I want to thank those children who contributed towards the Under-17 Female team’s road to Azerbaijan,” Youth Minister Jammeh stated.

He said if the young boys and girls could do this, much is expected from the others such as the grown-ups.He appealed to the general public to emulate the country’s future leaders for their kind contribution towards the under-17 team participation to the Azerbaijan tournament.

Government cannot do it all; government can only provide policies, create right environment and where necessary provide funding, he remarked.

Director of Youth and Sports Pa Suwareh Faye assured Minister Faye and her ministry that the money presented to his minister will be used for the right purpose.

“This under-17 female national team is the first female team to be qualified for the championship and it was not a surprise to me when my minister told me that Minister Faye is to present some money to us towards the Under-17 Female team’s participation in the Azerbaijan tournament,” he said.

The executive secretary of Gambia for Gold, Ebou Secka, also spoke at the ceremony, whilst the deputy permanent secretary of Administration at the Ministry of Basic and Secondary Education, Ebrima Sisawo, chaired the occasion.