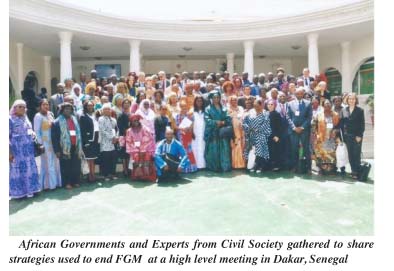 Government representatives and experts recently concluded a high level consultation to share experiences on strategies used in the campaign to end Female Genital Mutilation in the Senegalese capital Dakar.

The meeting organized by No Peace Without Justice in partnership with the Senegalese Ministry of Women, Family and Children’s Affairs, Inter Africa Committee on Traditional Practices, and other partners supported by the Italian Ministry of Foreign Affairs and International Cooperation / Italian Agency for Development Cooperation.

The consultation provided opportunities for the high level meeting to review the implementation of the United Nations General Assembly Resolution 69/150 on “intensifying global efforts and sharing good practices to effectively eliminate female genital mutilation” and the fight to eliminate FGM in the ECOWAS countries and Mauritania. The meeting focussed on the particular approaches undertaken in the effective implementation of the existing laws banning FGM at the national level and cooperation to combat trans-border practice of FGM in West Africa.

The high level meeting brought together delegates of the Ministries of Women, Health and Justice of ECOWAS countries and Mauritania, as well as Civil Society participants amongst them the Executive Director of GAMCOTRAP, Dr. Isatou Touray.  Speaking as an expert on FGM from The Gambia, Dr. Touray noted that the meeting aimed to revitalize engagement and dialogue between institutions and civil society, as well as contribute to strengthening the political and legislative legal framework to combat FGM as a form of violence against women. The meeting ended with a communiqué to support the total elimination of FGM.

On a separate mission, the Executive Director of GAMCOTRAP is attended an International Conference on Human Rights Approach to Ending Female Genital Mutilation (FGM) in One Generation in Geneva, Switzerland. The two days conference is organized by the Inter-African Committee on Traditional Practices Affecting the Health of Women and Children (IAC), with the objective of showcasing best practices, achievements and progress while highlighting challenges and barriers with concrete action points for moving forward the agenda to end Female Genital Mutilation in One Generation.

It could be recalled that GAMCOTRAP has been taking a lead in raising consciousness amongst Gambians on the harmful effects of Female Genital Mutilation and early marriage and how it affects the rights and dignity of women and girls for the past three decades which culminated to five public declarations in a dropping of the Knife celebration of 158 Circumcisers and 1015 communities participated, making public pledges to protect girls from the practice. In the same vein, The Gambian President made a public pronouncement banning the practice in November 2015 and followed by an enactment of a law criminalizing and prohibiting the practice of FGM.

Despite these gains, there are communities yet to benefit from the awareness raising programmes in particular regions of The Gambia.  GAMCOTRAP urges partners working on FGM to consolidate on the gains made by reaching out to the remaining areas that have not had the opportunity to benefit from the awareness raising programmes to be able to make informed decisions and choices to end the practice and to advocate for an effective implementation of the anti- FGM law for more effective protection of girls. 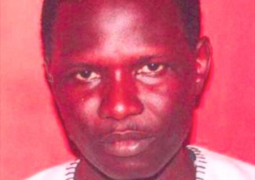