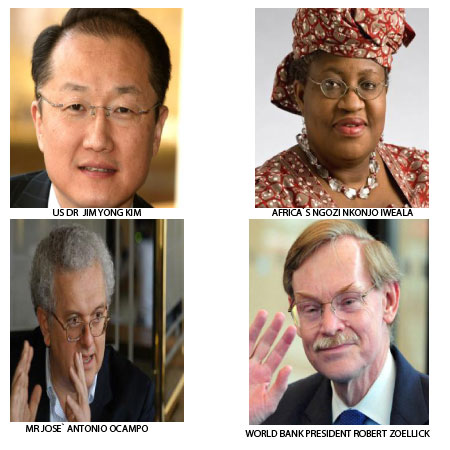 In a weeks’ time or so a new president will be voted to wield the affairs of the World Bank.

Robert Zoellick, the current World Bank President, will step down from the post when his term ends in June, and a new president will be voted in by a 25-member board of directors of the Bank, of which the alone has 15 per cent stake.

Unlike the past 68 years when the presidency of the Bank was hardly contested, if at all it is, today it is open for contest so that the most competent, qualified and deserving personality/candidate can assume the office to work objectively for the good and development of the world.

has held the presidency since the Bank’s founding after World War Two, while a European has always led the International Monetary Fund.

All of the World Bank’s 187 member nations have committed to a merit-based process to select Zoellick’s successor.

Emerging and developing economies have long talked up their desire to break US and European dominance of the Bretton Woods Institutions, but have until now failed to build a coalition large enough to change the status quo.

As the race to the World Bank top job gets hotter (scheduled to take place on April 20 -22, 2012, in Washington DC), three main candidates have been shortlisted or nominated to take over the post. These are Africa’s Nigerian Finance Minister Ngozi Okonjo-Iweala, ’ Dr Jim Yong Kim and ’s José Antonio Ocampo.

Dr Ngozi Okonjo-Iweala, a former managing director of the World Bank and current finance minister of , may possibly make it over the other contestants if the support of the African Union (AU) is anything to go by, as the has already given a resounding support to the candidacy of the African heroine.

Dr Okonjo-Iweala is a development professional who spent more than two decades at the World Bank before becoming the finance minister of .

Okonjo-Iweala, 57, had served as World Bank VP and managing director and would be the first woman World Bank president, if she gets the office.

While Okonjo-Iweala is receiving support globally, there are cracks even in the AU camp, as President Paul Kagame of is reported to have openly supported the ’ choice against ’s.

It is also expected that voting percentage might work against Dr Okonjo-Iweala as has just one per cent voting power while the has about 15 per cent.

Kim was director of the department of HIV/AIDS at the World Health Organization and, while there, led a successful initiative to treat three million AIDS patients by 2005.

He earned a medical degree and an anthropology doctorate from Harvard, where he founded a non-profit agency Partners in Health (PHI) with medical school classmate Paul Farmer.  The PHI renders community-based healthcare services in a number of African countries.

“Meanwhile, many opinion leaders believe that the nominee is not the best person to handle the World Bank’s top job because he lacks the broader experience that the World Bank president should normally possess,” reports indicated.

On the other hand, as the sole candidate of the , Kim may also enjoy more backing as he is a direct nominee and choice of the most powerful president in the world, Barrack Obama.

Also, the decision of the bank’s Board of Directors, which is made up of 25 members, of which the US and European countries already have a majority, may make a great difference. The alone has about 15 per cent voting power on the board.

Columbian nominee José Antonio Ocampo, a former UN under-secretary-general for economic and social affairs, may be lucky if the selection process is done on merit as being promised by the World Bank.

He has managed and reformed major global institutions and government ministries. He is also a leading development economist in academia.

Reports indicate that he also did well in reforming the UN Economic Commission for Latin America and the , where he was executive secretary from 1998 to 2003.

From 1989 to 1997 he held a number of senior posts in the Colombian government, including finance minister and chair of the Central Bank board.

In addition, he was minister of national planning, and minister of agriculture and rural development. In all these capacities he was a proven reformer.

Starting operations in 1946, the Bank is financed partly by contributions paid by member countries, partly by bond issues.

The national contributions constitute the World Bank’s capital and relate to the individual countries’ share of world trade. The bond issues finance the lending operations of the bank.

Operational revenues have come to be supplemented over the course of time by receipts of interest on, and repayment of the capital of loans.

In financing the economic needs of member countries, the IBRD complements the IMF, which finances temporary balance of payments difficulties. Loans are made to governments or government-guaranteed entities.

At first devoted to the reconstruction needs of industrial countries, the World Bank by the 1950s had focused its attention on the developing world, says Graham Bannock, author of several books on finance and business.

In 1956, the IBRD formed the International Finance Corporation, the purpose of which was to promote growth in the private sector of developing countries and to mobilise domestic and foreign capital for this purpose.

In 1960, the IBRD formed the International Development Association in order to assist the poorer developing countries.