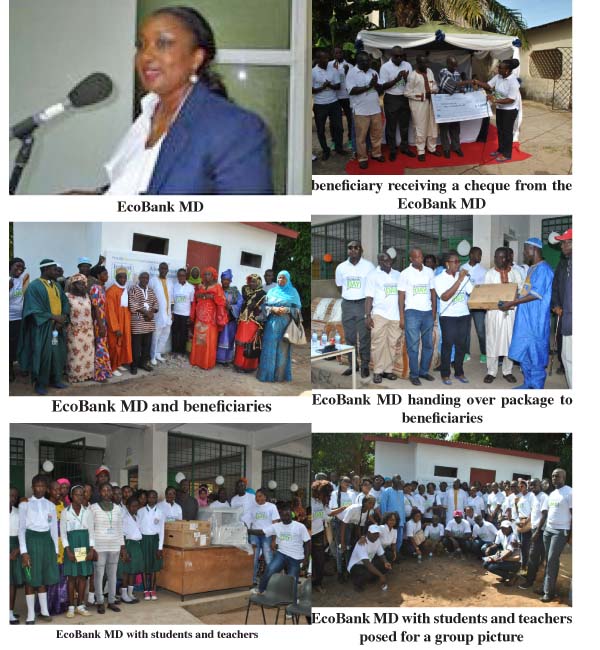 Ecobank Gambia Limited has continued its remarkable corporate social responsibility project by donating learning materials and a substantial amount of cash to three schools in The Gambia, in commemoration of its annual Ecobank Day.

“Ecobank Day” is simultaneously commemorated by all Ecobank subsidiaries and the parent body throughout the 35 countries across Africa where the Bank operates.

Ecobank Transnational Incorporated (ETI), the parent company of the Ecobank Group, has set aside one Saturday in October of every year as “Ecobank Day” to embark on major Corporate Social Responsibility projects across all its affiliates.

This year’s event is celebrated on the theme: “Every Child in Africa Deserves a Better Future”.

In this year’s celebration, the bank built and handed over a toilet facility to the Bakau Lower Basic School worth D180,000; a cheque for D40,000 to Sunlight Creche and a photocopier, printer and computer to SerreKunda Annex LBS worth D83,000.

The day marked another milestone in the history of the Ecobank Group as staff of the bank got together to give back to the communities they operate in.

“Corporate Social Responsibility in Ecobank is considered a critical activity, as it constitutes one of the main pillars of our vision of contributing to the socio-economic development of Africa and The Gambia,” said Ecobank Managing Director, Josephine Anan Ankoma, in her remarks on the occasion.

“As a Pan-African banking institution, she noted, “we are passionate about the development of Africa and the African people, and for this reason Ecobank Gambia has over the years made substantial contributions towards the socio-economic development of Gambia by giving various support to institutions across the country, such as St. John’s School for the Deaf, Kabafita Lower Basic School and the Serrekunda General Hospital, to mention a few.”

MD Ankoma said the choice of their celebration theme this year -“Every Child in Africa Deserves a Better Future” - stemmed from the fact that the children of today are the key actors of tomorrow in whose hands will rest the ideas and tools that will define how they achieve equitable sustainable development for Africa.

For more than half a century many development partners, non-governmental organizations (NGOs)and various governments have made impressive progress towards realizing child rights, with the focus on helping under-privileged children to access basic needs such as food, safe drinking water, sanitation facilities, health, shelter, and education - for their survival.

There, however, remains much more to be done, the Ecobank Gambia MD said, adding that millions of children across Africa are today still unable to live in dignity, reach their full potential or make choices about their future.

It is against this backdrop, MD Ankoma noted, that Ecobank Gambia identified three schools in the Greater Banjul Area that received support from the bank in respect of ‘2015 Ecobank Day’, focusing on doling out major Corporate Social Responsibility projects across all its affiliates.

At the Bakau Lower Basic School the bank constructed a place of convenience for about 1400 students and teachers at a cost of GMD180,000.

“We are confident that this contribution will go a long way to provide them with the added comfort they require to focus on school work,” she said.

The bank also provided Serrekunda Annex Lower Basic School with a photocopier, printer and computer to enable the school efficiently print examination papers and other relevant documents with ease.

“This donation is valued at GMD83,000,” MD Ankoma said, adding: “We believe that this gesture from us, in addition to saving costs, will ensure that examinations in the school are run with very little difficulty.”

She continued: “I can boldly say that ‘Education is the key to the future’. In support of the development of talent across the country 3 (three) pupils of The Sunlight Creche – a school that takes care of the children of underprivileged women – will also benefit from a full year’s scholarship from Ecobank valued at GMD40,000.”

These projects, MD Ankoma said, were identified by engaging the various beneficiaries to ensure that the support addresses their specific needs.

“The projects will bring improvement in the lives of school children or the communities in which they are sited, and facilitate development of our future leaders,” she said, adding:

“By these donations, Ecobank reaffirms its commitment to its vision of contributing to the development of Africa. We will continue to support the social well-being and economic development of our local communities and the country at large.

“The future, indeed, is Pan-African and Ecobank is the Pan African Bank!!!”

She entreated the beneficiary institutions to take good care of the investments the bank has made in them.

In response, the Principal of the Bakau Lower Basic School, Tijan Ceesay, commended the bank for the gesture, saying it came at a time it was highly needed by the school, as it has embarked on modernization of the school.

Mr Ceesay pointed out that the Bakau LBS “has been the oldest school in the country” but didn’t have a storey building.

“I thank Ecobank for responding to one of our needs,” he said, assuring the bank that they would take good care of the facility.

The coordinator for Sunlight Creche, Joseph Buckey, in his remarks, thanked the bank for the support, saying the school was established in January 2013 and approved by the Ministry of Education on a provisional licence, and has today grown to providing invaluable service to underprivileged children of The Gambia.

The objectives of the institution, he noted, were to promote early childhood quality education, to enhance the opportunities for access to high quality primary education by providing basic skills for children aged 4 to 7, to reduce the health risk vulnerable children are exposed to, and to improve business productivity for affected mothers, among others.