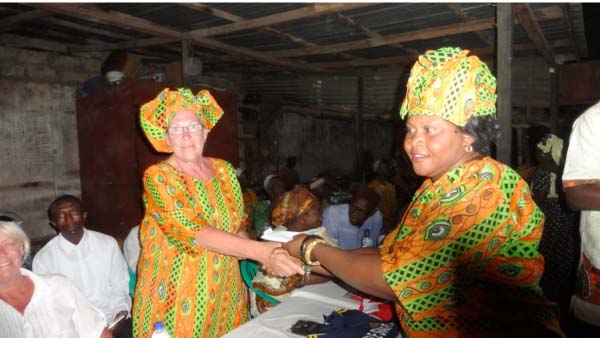 Musical Friends of The Gambia, a charitable organisation based in The Netherland, at the weekend handed over one stand-tap to Bundung Car Park Drivers Association.

The item was donated in collaboration with Bundung Mauritania Six Junction APRC Yai Compin and the Association for Community Initiative Project.

Also, a sum of D30,000 cash was given to ten women groups in Bundung Six Junction Ward and football jerseys to six teams within Bundung.

During the presentation ceremony, councilor for Bundung Six Junction Ward, Sulayman Jammeh, pledged D10,000 while Hon. Sainey Jaiteh, National Assembly Member for Serekunda Central, pledged D5,000 as their personal contributions towards the organisation of a football tournament to be name after President Yahya Jammeh.

Speaking on the presentation, Councilor Jammeh said the Dutch organisation and the Association for Community Initiative Project based in Bundung started partnership since 2007.They have since then being working “very closely” for the development of women in particular.

He said last year, the association paid for seven community stand-taps and the one given to Bundung car park is part of the seven.

The ward councilor commended the Dutch donors for their support to the association in improving lives and livelihoods in Bundung.

He said the work of the association is geared towards complementing efforts of The Gambia government in transforming the country to an economic super power.

Councilor Jammeh commended the electorates of his ward for the continued trust bestowed on him.

National Assembly Member for Serekunda Central Hon. Sainey Jaiteh applauded the donors for providing “the essential amenity” to the people of Bundung.

He urged the recipients to make efforts for the longevity of the stand-taps.

Adama Mbye, a youth representative, thanked the donors for their timely intervention and assured them that the donated items will be used for the rightful purpose.

The Supremacy of Literacy