One Papa Hydara was yesterday cautioned and discharged by Magistrate Nyima Samateh of the Banjul Magistrates’ Court after being found liable for possession of prohibited drug.

According to the particulars of offence, the accused, Papa Hydara, on 12 February 2014 at Brufut in the West Coast Region, had in his possession 80 grams of cannabis sativa, a prohibited drug and thereby committed an offence.

During the trial, the prosecution called five witnesses in support of their case, and the accused also testified in his defence.

In his plea of mitigation, the accused person begged for mercy as he is the breadwinner of his family.

In delivering her judgment, the trial magistrate told the court that she had looked at the demeanour of the accused person, and he looked very remorseful.

The record had shown that the accused person was a first-time offender, and since the beginning of this trial he has always been present in court, she said.

The accused person is also young man who has his life ahead of him, and she believes if given a second chance he could change for the better.

The accused person is hereby warned never to appear before this court or any narcotics court, as the court would not show any leniency again, the magistrate announced. 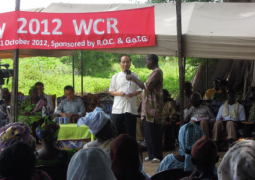