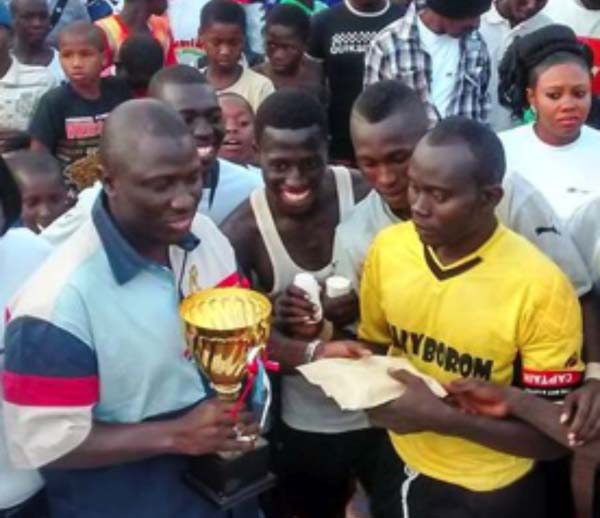 Two fine headers by the forwards of Jambarr FC gave their team victory over FIG FC in the nail-biting finals of the Trust Bank-sponsored league competition of Essau town.

The team from Mayamba village, Jambarr, defeated the youngsters of Essau by 2 - 0 in regulation time, during the finals played at the Essau Lower Basic School football pitch on Saturday.

It was the climax of the tournament, which started in the summer and was organised by the Essau Youth and Sports Development Committee.The tournament attracted 18 teams from Essau and the surrounding villages including Barra, Mayamba and Kanuma.

The finals saw both the youngsters of Essau, who are newcomers in the competition, and the visiting team from Mayamba displaying wonderful skills on the pitch.

Both teams did all they could to score in the first half, but it was fruitless as the first 45 minutes ended goal-less.

The teams came from the dressing room more eager to find the back of net, by capitalising on the any slight opportunity they could make.

Just four minutes into the second half, the visiting team’s forward, Modou Njie Joof aka Energy, scored a header within the six yards area.

The youngsters of Essau, FIG, did all they could to level the score, fighting frantically, but it was fruitless as the visitors solidified their defence while looking for more goals.

They had another one; it was another header by another forward of Mayanba, Matarr Kebbeh, less than five minutes to the end of the game. That was the final goal of the game which ended 2-nil.

In a post-match interview, the coach of Jambarr, David Jarju aka Asib, said he actually saw the victory coming, as he prepared for it.

“I know that the boys can make it because we prepared for this game both physically and mentally,” he said.

“I have experienced players in the team, the likes of Modou Njie Joof aka Energy, and Modou Lamin Marong; the two were the most outstanding strikers in the zonal, so with them in my frontline I knew the team will have victory.”

The coach of FIG, Alfusainey Marong, blamed his team’s defeat on the injury of his players.“Some of my key players have injury; players like Assan, Samba Touray and Lamin Njie and these are my key players,” he said.

Coach Marong said they prepared well for the game, but “we still take the loss in good faith because football is either win or loss.”

The public relations officer of Essau Youths and Sports Development Committee, Yankuba Bojang, said the finals just like the tournament in its entirety has been very successful, thanks to the maturity of the players, match officials and the fans.

He thanked Trust Bank for sponsoring the competition, while calling on others to emulate the Gambian-owned bank in supporting football, particularly at the grassroots.

Mr Bojang said the committee needs more support from any institution or individual who is interested in grassroots football development.

He said they need help to fence the perimeter of the pitch.“Having a perimeter fence will be to the security of the players, the referees and other match-officials,” he said.