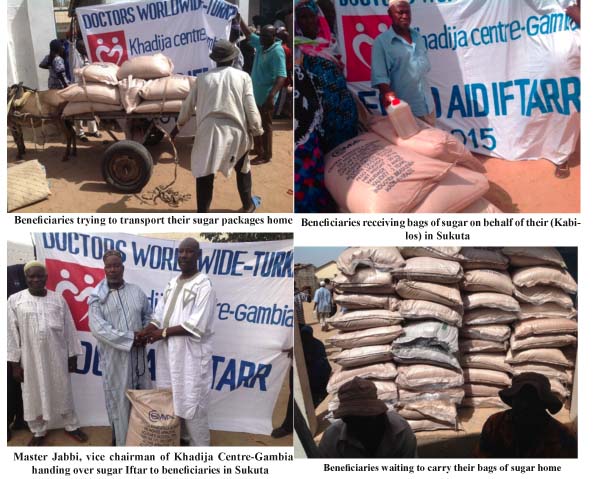 “Doctors Worldwide –Turkey” through Khadija Foundation Centre in London, The UK, on Monday donated food aid worth of US$5,000 equivalent to D200,000, to Khadija Centre- Gambia for onward distribution to the poor and needy Muslims in The Gambia, as part of Ramadan Iftar .

The donated food items included more than two hundred50kg bags of rice, oil, sugar and other items for distribution in Sukuta among four ‘Kabilos’, in need of such food items especially in this month of Ramadan.

The distribution was carried out by Sukuta Medina Development Association under the coordination of Mr Jabbi, commonly known as Master Jabbi.

It was witnessed by various members of the beneficiary communities, including imams and other religious leaders, elders, youth and women kafos.

Speaking at the distribution in Sukuta, Mr Mohammed F. Jabbi, vice chairman of Khadija Centre - Gambia, gave a brief history of the foundation, saying it is operating in Kenya, Senegal, Mauritania and The Gambia.

“Khadija Foundation is based in London with its chairman Feisal Sherman,” Master Jabbi said, adding that the foundation started operating in Kenya in 2003 and in The Gambia 2006.

He also seized the opportunity to thank the family of the chairman of Khadija Foundation Centre in London for the donation to the people of The Gambia.

“These gifts have come at the right time and to people really in need of food aid in this holy month of Ramadan,” he said.

According to Mr Jabbi, the foundation also focuses on education, and religious spiritual development, which is very important to them.

The beneficiaries included widows with children and other needy people hence the food aid is key, especially in this month of Ramadan.

He said further that the main objective of the foundation is to contribute its quota to national development by complementing government’s effort in such areas as education “since government alone cannot do it all”.

Mr Jabbi, who said he strongly believes in sharing and caring, noted that it makes no sense keeping over two hundred bags of sugar with them at home, “while your neighbours are suffering”.

He urged the people to change their attitude and adopt the culture of sharing and caring.

He also commended the Government of The Gambia under the dynamic leadership of President Yahya Jammeh for creating the enabling environment for investors to invest in communities across the country. “All this is a clear indication of good leadership and love for humanity,” he noted.

For his part, Alieu Keita, secretary general of Sukuta-Medina Development Association, commended the donors for the benevolent gesture and trust bestowed on Master Jabbi to coordinate the onward distribution of the foodstuffs to the needy in The Gambia.

The food aid has come at the right time and to the right people who are very much in need of it, as most of them find it very difficult to break their Ramadan fast each day,” he said. “So getting this food aid will greatly reduce their burden.”

He also appealed to members of Doctors Worldwide –Turkey to bring more food aid to the needy in The Gambia especially in the month of Ramadan.

Seediya Touray, a beneficiary, representing the Brufut Upper Basic School, said they were very happy and appreciative of the donation received by them, as it would go a long way in addressing their burden at home.

He therefore seized the opportunity to thank both the donors and Master Jabbi for being so transparent and trustworthy in ensuring that the items reach the right people.

“This is the month people should show more love to each other and help the less privileged persons; therefore this food aid will be a big supplement to our family projects,” he said.

According to him, he has been working under Master Jabbi over the years, and has known him to be “someone who has good heart for humanity”.

Abdoulie Jatta, another beneficiary, expressed appreciation and gratitude to the donors for the kind gesture, saying it is not a mistake giving the food items to Gambian communities.

This is a month of caring and sharing, he said, and commended Master Jabbi for being a “very reliable person who cares for humanity”.

Jainaba Cham, also a beneficiary, expressed joy and appreciation at receiving the gesture.

She thanked the donors, as well as appealed to them for more food aid, saying: “We are in need of these items.”

She also thanked Master Jabbi for being open-hearted and kind to humanity.