An exclamation like ‘Dis kind God’ denotes that the person was stunned by what God has done and what He continues to do. Yes, our God never ceases to amaze us daily with even the simple things He does in our lives in order to glorify His Holy name. He is a miracle-working God!

The price of sin

Our great, great ancestors, Adam and Eve, had sinned and had fallen out of favour with God. It was a sin for which the penalty could not be paid humanly speaking. To redeem humanity therefore, God offered His only son, our Saviour, Jesus Christ to die in our stead. Only He could pay the price of sin, because He had not committed sin. Do you get the picture? “God made Him who had no sin to be sin for us, so that in Him we might become the righteousness of God.” (2 Corinthians 5:21) He gave His Son (He did not look any further) who became sin for us and redeemed us from the curse.

The prophet Elijah had declared drought across the land in these terms: “As the Lord, the God of Israel lives, whom I serve, there will be neither dew nor rain in the next few years except at my word.” (1 Kings 17:1) Thereafter the prophet received word from the Lord asking him to go and hide in the Kerith Ravine, east of the because king Ahab sought to kill him. “You will drink from the brook, and I have ordered the ravens to feed you there.” (1 Kings 17:4) Dis kind God sef! He ordered ravens to feed the prophet. “The ravens brought him bread and meat in the morning and bread and meat in the evening and he drank from the brook.” (1 Kings 17:6)

In order words, God spoke to birds to take food to the prophet in his hiding place. The situation endured until the brook dried up and the prophet received instructions to “Go at once to Zarephath of Sidon and stay there. I have commanded a widow in that place to supply you with food.” (1 Kings 17:9) Isn’t this very awesome!  Ever seen this kind of God who takes care of every detail? God is our Provider and He “…will meet all your needs according to His glorious riches in Christ Jesus.” (Philippians 4:19)

The famine had become severe. The prophet on arrival met with the widow as she was collecting sticks with which to cook her last meal for herself and her son. All they had to survive on was ‘a handful of flour in a jar’ along with ‘a little oil in a jug,’ “– that we may eat it - and die” she lamented. The prophet asked her for water to drink and a piece of bread to eat. He further stipulated that she should prepare the meal for him first so he could eat before she could prepare for her son and herself. What a request!

She obeyed. “The jar of flour,” said the Lord, “will not be used up and the jug of oil will not run dry until the day the Lord gives rain on the land.” (1 Kings 17:14) Indeed, nothing was amiss until the next rain. Everyday, Elijah, the woman and her family had food to eat in accordance with the word of the Lord.

The prophet Isaiah wrote: “ ‘To whom will you compare me? Or who is my equal?” says the Holy One.” (Isaiah 40:25) Ever thought of answering that question? None! Neither on earth nor in heaven! No one compares to our God! “Who among the gods is like You, O Lord? Who is like You – majestic in holiness, awesome in glory, working wonders?” (Exodus 15:11) We are not magnifying God’s ways. Far be it. These deeds are just His nature. That is what He is. God cannot be different from His word or from His nature. “He is the Rock, His works are perfect, and all His ways are just….’ (Deuteronomy 32:4)

The journey from to the Promised Land that had started with Moses, was coming to a head with Joshua. The Israelites had reached the final lap prior to the takeover bid and ’s army had besieged fortified . Clear instructions were given by the Lord.  “See I have delivered into your hands, along with its kings and its fighting men. March round the city once with all the armed men. Do this for six days. Have seven priests carry trumpets of rams’ horns in front of the ark. On the seventh day, march around the city seven times, with the priests blowing the trumpets. When you hear them sound a long blast on the trumpets, have all the people give a loud shout; then the wall of the city will collapse and the people will go up, every man straight in.” (Joshua 6:2-5)

The city of was sealed, “tightly shut because of the Israelites. No one went out and no one came in.” (Joshua 6:1) Its inhabitants were afraid of the invading Israelite army. Yet with a blast and a shout the walls of collapsed like a pack of cards. Incredible but true! It is ‘dis kind God oh’ at work again. He, for whom, nothing is impossible. He confirms once again in no uncertain terms: “And there is no God apart from me, a righteous God and a Saviour; there is none but me.” (Isaiah 45:21)

Even the winds and the water

Jesus was in the boat with His disciples and they were to cross to the other side of the River Jordan. He had told them so as they set off. Halfway across, a sudden furious storm raged. It found Jesus fast asleep in the back of the boat, oblivious to what was happening. The disciples - seasoned sailors and fishermen - panicked and ran to wake Him up from His sleep.

Dis kind God! You probably want to have an encounter with Him now. Say this prayer. Lord, reveal yourself to me. I am hungry and thirsty for your Word. In Jesus’ name. 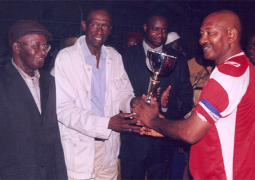 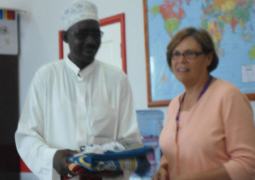