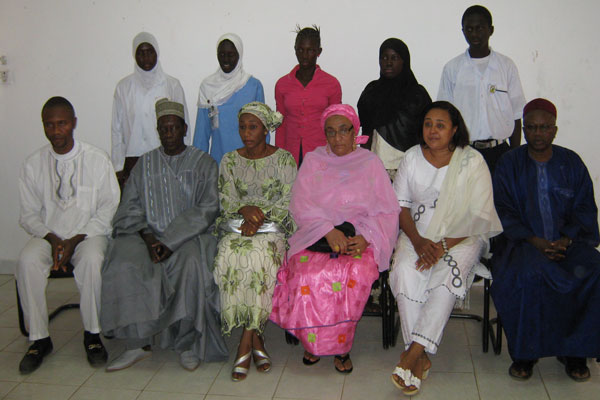 Access to education is a fundamental human right but some children, due to one reason or the other, lack this human right. In line with the principles of the late Deyda Hydara who has been a strong advocate of human rights, the Deyda Hydara Trust (DHT) last Friday awarded scholarships to six needy students from different schools in the country.

The award ceremony, held at Tango office's in Bakau, witnessed the presentation of cheques amounting to D3,000 to each of the beneficiaries to cover their tuition fees and other expenses.

The beneficiaries are Fatoumatta K.Trawalleh of Nasir Senior School Basse, Mansour Sowe of Siffoe Senior, Ebrima Banda and Mariatou Sanyang both from Nusrat, Jainaba Kujabi of GambiaMuslimSeniorSchool and Donna Kaloko of Daddy JobeComprehensiveSchool.

Speaking at the occasion, Mr. Matarr Baldeh, a member of the of the DHT scholarships committee, revealed that the trust is a registered charity in The Gambia existing to foster press freedom, good governance and sustainable development across Africa.

According to him, the scholarships are funded with the proceeds from the Deyda Hydara biography 'A Living Mirror: The Life of Deyda Hydara.

He advised the lucky beneficiaries to make the best use of the scholarship noting that they were selected from a lot of applicants. "If you work hard you may benefit from the trust again and others can also benefit".

Ndey Tapha Sosseh, President of The Gambia Press Union, congratulated the awardees for the scholarship. She also encouraged the beneficiaries to be committed to their learning. "We see this as a celebration of Deyda's life," she said.

Mr. Ousman Ndow, a member of the board, said that the initiative is a testimony of the good work the late Deyda had done while alive. "Education is one way this country can be developed," said Mr.Ndow.

Other speakers included Mrs. Yadicon Njie-Eribo, coordinator FEWEGAM and also a member of the trust.

In delivering the vote of thanks Nfamara Jawneh President Young Journalists Association of The Gambia (YJAG) applauded the DHT board of trustees and his family for the initiative. He said that the late Deyda had been very much engaged in human interest stories journalism. "He has stood for the voiceless and served humanity during his life time as sincere journalist. I would like to encourage all young and aspiring journalists to see Deyda Hydara as a role model," he said.

The occasion was graced by journalists, the wife of the late Deyda, the managing director of The Point Mr. Pap Saine and members of the civil society.