The Department of State for Trade, Industry and Employment has issued a stark warning to importers and wholesalers who it says are involved in "anti-competative" and "illegal" practices which are "unhealthy for the economy".

The practices in question involve the tying of the purchase of rice to other goods and also the tying of certain types of rice to others in terms of purchase. In some cases the department states that retailers are being denied the opportunity to buy one kind of rice unless they buy 25% broken at the same time.

According to a press release, the Department believes that these practices can "contribute to high retail prices as retailers who find themselves with goods that they cannot sell end up applying a margin on the price of rice".

The illegality of the practice lies in its violation of the provisions of the Competition Act 2007 which came into force on . In citing this fact the press release states, "We therefore call on all those involved in such practice to desist with immediate effect, or face the full force of the law".

In conclusion the department solicits the co-operation of the business community and the general public "in making the Gambian business environment more conducive." 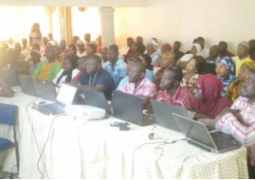