Darboe and 19 others at court of appeal

It would be recalled that the appellants were jailed for three years last July by the High Court in Banjul, after they were convicted for unlawful assembly, holding a procession without a permit, conspiracy, and riot, among others.

During the court sitting yesterday, lawyer A.A.B. Gaye told the court that the appellants had filed a motion dated 24 October 2016, seeking to consolidate the individual appellants appeal, adding that the DPP had been served.

In his reply, DPP S.H. Barkum informed the court that the state was not opposing the motion to consolidate the appellants’ appeal, thus acknowledged receipt of the said motion.

In her ruling, the president of the Gambia Court of Appeal, Justice A.O. Adegoke, adjourned the matter until 5 December 2016, for proof of service and ordering of briefs.

She pointed out that the principal registrar is mandated to prepare the appeal, and be given a number accordingly.

Ousainou Darboe, who was dressed in a blue kaftan, was cheered by family members and supporters, shouting “animbara...animbara…nyancho,” as he stepped out of the courtroom. 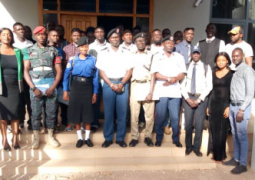