Government officials last Thursday said they have uncovered several damaged communication gadgets and a fleet of luxurious vehicles purchased by ex-president Yahya Jammeh at the State House in Banjul.

The Minister of Information Demba A. Jawo and Minister of the Interior Mai Ahmed Fatty took a conducted tour of the premises to gather firsthand information on alleged malpractices committed by the former president prior to his exile.

Minister Jawo said the communication gadgets were deliberately vandalized by the former President and his allies to distort audio-visual and written facts. Cameras, computers, files, filing cabinets and other valuables were found to be seriously damaged.  The ministers vowed that government would investigate the matter and those responsible would be prosecuted.

Minister Fatty said the public would be duly informed about the outcome of the investigation through the Ministry of Information. The officials also discovered some military hardware kept by the former president. They expressed dismay over the exorbitant sums of money Jammeh used to purchase the vehicles despite the poor economic state of the country. 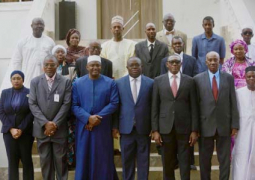