Assan Sallah, News editor at the Daily Observer Newspaper Company, yesterday testified in the trial of Nanama Keita, former sports editor at the same company, who is being tried for giving false information at the Banjul Magistrates’ Court before Magistrate Alagba.

In his evidence-in-chief, Sallah told the court that he works at the Daily Observer Company, and that he is the news editor.

He also said that he knows the accused person, who was working at the Daily Observer Company as the sports editor under the editorial department.

Sallah said he could recall what happened on 21 April 2011, when they were called to a meeting at the Managing Director’s office.

“Myself, the accused, Alhagie Jobe, the MD, Musa Sanno, the chief driver, Modou Camara and one Musa Bojang a mechanic attended” said the prosecution witness.

He further said that the MD stated that it was purposely for editorial functions, and that it was meant to serve the company.

“After the MD’s remarks, each of us present at the meeting said something about the arrival of the car,” the news editor continued, adding that after the meeting the MD asked him, the accused person, Alhagie Jobe and Musa Bojang, the mechanic, to go and test the car.

Still in his testimony, the witness told the court that after testing the said car, all of them expressed satisfaction with the vehicle, including the accused person.

“The accused on his part said that he had no problem with Alhagie Jobe handling the car,” said the witness.

He adduced that the accused further asserted that there are gone the days when there was infighting among senior members in the Daily Observer Company.

He added that the MD asked him to come to the office on that night, and told him that they were going to have a meeting about the publications made in the Freedom Newspaper based in the .

The witness informed the court that as soon as the accused entered the MD’s office he was saying, ‘Oh Freedom! Oh Sheriff Bojang!’

Asked by the prosecutor who that Sheriff Bojang was, the witness told the court that he is the current MD of The Standard Newspaper and one time MD at the Daily Observer newspaper company.

Further testifying, Mr Sallah said that after the accused made this statement, the MD opened the meeting by informing them about an article published in the Freedom Newspaper.

He added that, at that time, the MD had already received  a copy of the said paper from a friend in the through his email address.

He told the court that after going through the said article, the MD informed all of them present at the meeting that he suspected that the article must have been written by the accused person.

He said that this raised a debate between the MD and the accused person, adding that this was the time the MD took the holy Quran and swore to God that if he was making an allegation against the accused without a genuine reason, let him die before he reaches home.

He said that the accused, for his part, refused to swear, but said that he did not write nor have any hand in that article.

According to the witness, it was indicated in the said publication that the MD bought a car for Alhagi Jobe for his personal use.

“After the meeting, we all went with the accused to his office with the IT expert, Modou Njie. On arrival the accused opened his office and logged on to his computer,” Sallah told the court.

The Observer news editor said that each of their computers has a password known to the user alone, of which the accused has his own.

“When he logged onto the computer, the IT expert went through the browser history of the said computer and a search was done through Google for the email address of Pa Nderry Mbye and his contacts,” Sallah told the court.

The MD subsequently concluded that the computer should be seized and kept in his office, Sallah told the court, adding that a few days later, the accused was given another new computer.

He added that a series of meetings were held regarding the matter.

Sallah said that there was another publication made in the Freedom newspaper, which was sent to them and after going through that article, it was realized that even the one to one meeting the accused person had with one of the board members, Momodou Sanyang, GRTS Director General, was in that article.

The witness said that a few days later, another publication was made again.

“On 3 May 2011, the MD decided to dismiss the accused person,” the Observer News Editor told the court.

The witness was, at that juncture, shown exhibits A1 and A2 which he recognized.

He said that exhibit A1 was a press card of the accused issued to him during the time of the former Observer MD, Neneh Mcdoll Gaye.

He adduced that normally at the Observer Company, when any Managing Director is appointed, he or she would change the press ID cards of all staff and to put their signature.

He said that exhibit A1 was not valid, adding that the accused was using the current press ID issued by the current MD, which he failed to show to the court.

He further noted that it was stated in exhibit A1 that the accused was the deputy editor-in-chief, adding that as far as he knows, the accused person was a sports editor and that was what was written in the company’s files.

Mr. Salllah further told the court that he had not seen any official letter indicating that the accused was the deputy editor-in-chief.

Under cross-examination, the witness was asked to look at the press ID as to whether there was any expiry date, to which he responded that there was no expiry date on the card.

Asked whether the press ID was genuinely issued by the Observer Company, the witness responded in the affirmative.

The defense counsel further asked the witness whether the accused person’s designation was changed, and he replied in the affirmative, adding that it was changed to sports editor.

He said that he could not remember the date, but it was changed a few months after the current MD was appointed.

He testified that the old press card was normally left with them.

Asked when exhibit A2 was issued, he replied that it was issued on the 2nd August 2011.

It was put to him that his evidence based on exhibits A1 and A2 was a complete fabrication, and there was no evidence supporting it.

The witness agreed with the counsel that exhibit A2 could not be compared with the accused person’s employment letter. 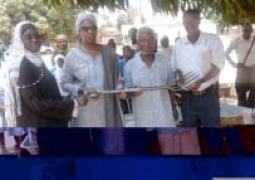 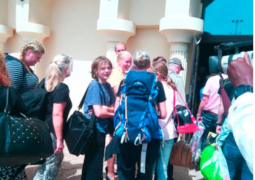