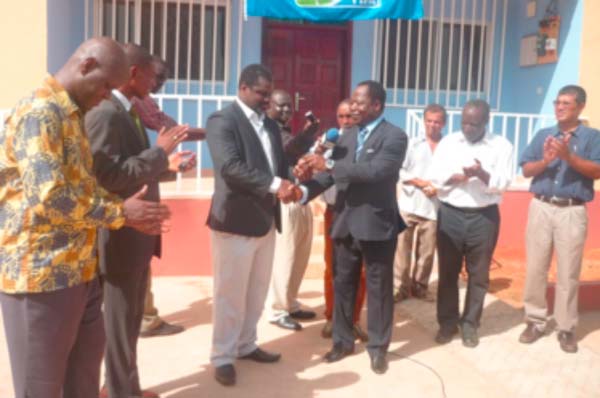 Shrecji Development Enterprise, who were contracted for the refurbishment work of the National Technical Training Centre (NTTC), yesterday, 5 November 2015, formally handed over keys of the centre to the Gambia Football Federation through FIFA Development Officer for West Africa Sampong Kaplan at the FIFA Goal Project in Yundum.

The centre’s refurbishment funded by FIFA cost US$500,000 (equivalent to twenty-five million dalasi), with the refurbishment process lasting 9 months.

He said they are impressed with the standard and quality of the building hence assured FIFA that the facilities will be put into good use.

The facility is not far from the tourism development area, he observed, saying they will utilize it as a sports centre as well as to generate income for its upkeep and other needs of the facility.

National Sports Council’s Executive Director Marcel Mendy said they had been looking forward to the realization of such a facility in The Gambia.

On behalf of the Gambia government, he expressed appreciation and thanked FIFA and CAF for the invaluable support and magnificent sports edifice.

“The buildings will go a long way in helping us improve both our male and female football,” he said.

He also thanked FIFA for helping GFF achieve one of its dreams.

He said the building will be a stepping stone for Gambian football.

The building will be maintained and used for its rightful purpose, he assured, while also thanking GFF president and his executive for their efforts towards ensuring the project is successfully completed as well as the development of Gambian football.

Mr Mendy also thanked the contractors for having done a wonderful job.

FIFA Development Officer for West Africa, Mr Sampong Kaplan, who was delegated as special representative to the event, for his part, said that at FIFA they need conducive places for technical directors and federations to work effectively and as such had to fund the refurbishment of the centre.

They are impressed and satisfied with the work carried out at the centre, he said, adding that they hope the federation would make best use of the centre.

In Africa our main problem is maintenance, he remarked, saying they would be visiting the centre to see that it is maintained, so that such projects are attracted to the country.

The National Technical Training Centre in Yundum is the Gambia’s 3rd Goal Project supported by FIFA.