The Director of Technical Service Network (TSN) at the National Environment Agency has said that The Gambia government is committed to phase out the consumption and production of Ozone Depleting Substances (ODS) by 2010.

Momodou B. Kanteh recently made this remark at a three-day training workshop for Customs, Police, Immigration, NIA, National Drug Enforcement Agency, and other security agencies on the detection, control and management of ODS.

Kanteh, however, disclosed that the continuous emission of Chloro-Fluoro-Carbons (CFCs), Halons, Methyl Bromide and Chloroforms would deplete the ozone layer, resulting in more severe environmental and health problems.

Recognising the vulnerability of human beings and the flora and fauna to ODS, the NEA Director of Technical Service Network said NEA and the government of The Gambia have over the years taken giants steps towards the reduction and ultimate elimination of ODS through a number of measures.

By the end of the training, according to Kanteh, participants are expected to clearly understand what ozone and ozone depletion is all about.

Sainey Ceesay, a senior Customs Officer-In-Charge in Farafenni called on colleagues in the security service to lead the fight against illegal entry of these depleting substances into the country.

The three-day training, which attracted over 25 participants from the North Bank Region, is among a series of its kind being conducted and organised by the NEA for security officers and refrigeration technicians throughout the country.

Samba Badjie and Alhagie Sarr, ODS programme officers at the National Environment Agency told the participants that the government of The Gambia is committed to phase out the consumption of Ozone Depleting Substances (ODS) leading to her ratification of the Vienna Convention for the protection of the Ozone Layer in May 1990 and the Montreal Protocol on substances that deplete the Ozone Layer in June 1990.

Sheikh Alkinky Sanyang NEA's Environmental Education Officer said nature is at conflict with mankind, and therefore appealed to participants to use environmentally friendly activities and devices to make the planet earth the only suitable and lasting home for generations yet unborn. 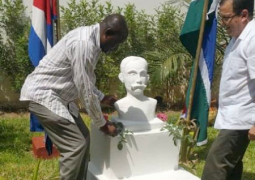