One Oustas Lamin Ceesay, the head teacher of Abubakarr Sidikh Islamic School in Sibanor village in Foni District, Western Region has appealed to NGOs, the government and philanthropists to help provide one classroom block for his booming school.

According to him, the number of students attending the school is increasing on a daily basis, thus the need for expansion.

Oustas Ceesay made this statement in an interview with The Point last Thursday, 14th January 2010.

"Due to the increase number of students, the school is now operating a double shift with only 7 teachers, including an English teacher," he disclosed.

He noted that he and his teachers wrote to Jammeh Foundation, UNHCR and World Islamic Call Society in for support but to no avail.

For his part, Mr. Lamin Touray, a concerned citizen also spoke about the need for expansion, adding that it is in line with the Millennium Development Goals and the campaign for education for all.

According to him, Sibanor is the centre and most of the students attending the school are from the satellite villages.

He said the school would soon be transformed into and , to meet the increase of the population.

Any body who wishes to help can contact the head teacher on 6606623. 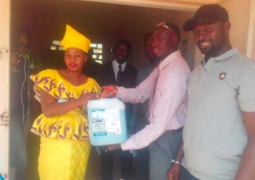