The particulars of offence stated that on 9 December 2011, the accused person, Alhagie Ismaila Jallow, wrote a petition to the Office of the President that he was unlawfully dismissed as the Alkalo of Sinchu Jenum in the Central River Region; that he was not on talking terms with the civil servants of the said region, and that all the lands belonging to his family were taken by the current Alkalo of the said village, which he knew was false at the time and thereby committed an offence.

Governor Touray told the court that he is a civil servant attached to Local Government and Lands as the Governor of the Central River Region.

According to him, he contacted the chief of the area and the officer commanding NIA as to whether what the accused person had written in his petition was true or false.

Governor noted that the matter was investigated, and it was found not to be true, adding that the accused person was suspended for that reason.

“After a month, I got a letter from the ministry informing me that the suspension of the accused was too long. That they either dismiss him or they reinstate him as an Alkalo,’’ he said.

“I contacted the chief to decide either to reinstate or dismiss him. The chief wrote back to me that he can no longer work with the accused person,” CRR Governor stated.

He said he also wrote back to the ministry and the Office of the President informing them what the chief had said, and he attached the original copy of his letter and that of the chief.

Eventually the accused person’s services were terminated as an Alkalo, he said.

Governor Touray added that the secretary general and head of civil servant later wrote to them to recommend somebody to be acting as the Alkalo of the village.

The said letters were tendered in evidence and marked as exhibits.

Governor Touray told the court that from there, the State House wrote to him that the accused person had given a plot of land to President Jammeh, but in that letter he was asked to find out whether the land belonged to the accused person before any documentation was made.

He said he contacted the chief of the area, who said he was not aware of any land that belongs to the accused person.

According to Governor Touray, he also further contacted the lady whose father was the founder of the village, who said the accused person had no land in that village.

He said he then called him to his office several times to advise him as an Alkalo that he needed to have a good rapport with his villagers, and he must show respect to his chief, but he refused to change his attitude.

Under cross-examination, Governor Touray told the court that he remembered the accused came to his office together with some members of the village to appeal, but he told them that he could not approve the appointment of anybody.

At that juncture, the case was adjourned to 5 July 2012, for hearing to continue. 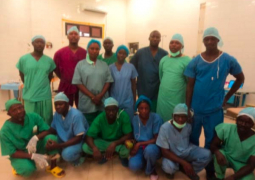