The criminal appeal case involving six appellants and the state resumed yesterday before the Gambia Court of Appeal, presided over by Justice Adegoke, president of the court of appeal, with Justice Awa Bah and Justice Edrissa Mb’ai as members.

It would be recalled that the appellants were convicted and sentenced to life imprisonment and death by a court martial on 30 March 2015 at the Fajara Barracks for treason and allied offences.

The appellants were charged with twelve counts of treason and allied offences ranging from concealment of treason to offences relating to mutiny.

When the matter came up yesterday, lawyer L.S. Camara, defence counsel for the 4th appellant, told the court that he was served with the substantive record of proceedings yesterday morning by the DPP.

He expressed gratitude for the state’s magnanimity in the compilation of the said record of proceedings.

He said the record is about 700 pages and, therefore, applied for leave to be granted to him to enable him file additional grounds of appeal on behalf of his client.

The DPP, S.H. Barkum, objected to his application to file additional grounds of appeal, noting that a lot of time has been spent in the name of compiling the record of proceedings.

The DPP pointed out that the state went the extra mile to assist in the compilation of the said record, to ensure speedy hearing of the case.

He said the appellant bears the burden of compiling the record and serving them on the respondents and, therefore, urged the court to order briefs to be filed by the parties as the records of proceedings are now ready.

The DPP submitted that the defence asking for an adjournment to file more grounds of appeal was not tenable.

He reminded the court that in April 2016, the appellants applied to file more grounds of appeal, and this was granted despite the objections raised by the state.

Any further adjournments at this stage would occasion unnecessary delay on the proceedings, the DPP added, and urged the court to reject the defence’s application to file additional grounds of appeal.

L.S. Camara disagreed with the DPP, and said the record of proceedings emanated from the court martial whose records were not readily and ordinarily available.

Counsel said the matter is a criminal case, and the burden is on the state to prepare the records in criminal matters and not the appellants.

That being the case, preparation of records of proceedings are not paid for by the appellants, who are incarcerated.

He submitted that the DPP misconstrued the difference between notice of appeal, and an application to file additional grounds of appeal.

He urged the court to grant the application having regard to the circumstances of the case, and the gravity of the punishment meted upon the appellants.

In the court’s ruling, Justice Adegoke said it was proper to grant the defence application, as he was only served yesterday morning with the records of proceedings.

The matter is a criminal case, and it is trite law and constitutionally imperative to grant the application.

The judge, therefore, refused the DPP’s application and ordered lawyer L.S. Camara to file the additional grounds of appeal.

The matter was then adjourned until 17 November 2016, for motion and ordering of briefs of arguments. 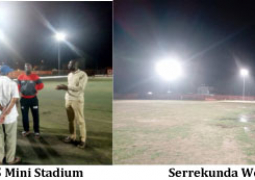