The chairman of the Board of Commissioners of the, The Gambia Public Utilities Regulatory Authority, Mr. Abdoulie Touray, has said that the launch of the consumer parliament by PURA has become the final act of 2008 which has effectively been the consumers year at PURA.

Mr. Touray was speaking at the launching of the recent consumer parliament for complaint resolution, held at the Paradise Suites Hotel in Kololi. He said, "these efforts have been geared towards empowering you the consumers by given you the opportunity, which is your right, to demand higher quality of service, such as an explanation from all service providers.

He continued saying, "the development of this concept has taken more than six months of thorough preparation and consultation. The PURA mandate, as enshrined  in the PURA act 2001, places heavy demands on PURA. It requires that in the discharge of its mandate  PURA acts as an arbitrator independently ensuring that both the interests of the public utilities providing a service and those of the consumers of these same services are adequately protected."

He pointed out that the PURA has emerged as a vital national  institution not only to ensure that consumers are getting what they are paying for, "but to protect you from high tariffs, malpractice and predatory advertising."

"As developing country it is important that where the government provides an enabling environment through the establishment and empowerment of institutions such as PURA, their mandates are delivered," he said.

"In 2008 the sector has embarked on hard work and research pertaining to regulatory of the public Utilities. It has issued a determination notice for the reduction of interconnection call charges between GAMTEL and all mobile operators. It has developed Tariff approval guidelines for the telecommunication market ensuring that tariff increases can occur and balance on potential increases is covered."

He said his institution has so far ensured that all tariff reviews are preceded by public consultation to incorporate the views of all stakeholders. "In furtherance of the work of PURA, the government agenda in respect of encouraging a liberalised market for telecommunications, electricity, water and sewerage, will be complimented and policed by PURA," he concluded. 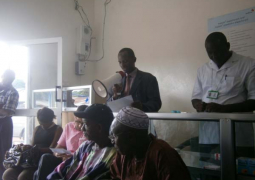