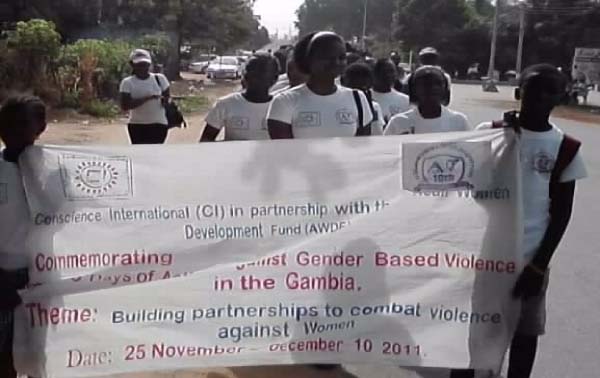 Conscience Int’l (CI) The Gambia, in collaboration with partners on 10th December 2011 joined the rest of the international community to commemorate world human rights day with a walk from the traffic lights on Kairaba Avenue to their office in Fajara

According to its officials, the commemoration of the day also marked the end of their 16 days of activism which aimed at highlighting the connection between women, violence and human rights.

Speaking to participants, Shaka Ceesay, Director of CI, said that the 10th of December is a day that the international community has agreed to recognize the importance of human rights all over the world.

He revealed that in the past 15 days, they have been conducting series of activities on human rights issues especially on gender-based violence.

He added that human rights are rights that human beings are born with.

Phyllis Machuka, commended the students for coming out in their large numbers to walk for the day.

She advised the students to make the best use of the lectures given to them on human rights.

He urged them to be committed and disseminate the message acquired from the event.