According to him, on that fateful day while at lunch he noticed that there were some cattle in his garden.

He adduced that when he went to chase them out, he saw the accused standing outside and asked him to take his cattle out of his garden.

Mr. Drammeh further revealed that, the accused then insulted him and later jumped over the fence and stabbed him with a knife on his forehead.

He said the matter was reported to Old Yundum Police Station, and consequently the accused was arrested. He added that he was taken to the Sukuta Health Centre for medical treatment.

The police prosecutor applied to tender the two shirts and the trouser worn by the complainant, which are purportedly stained with blood.

The accused objected to the application of the prosecution on the grounds that it was not the actual cloths worn by the complainant at the time of the alleged incident.

However, the accused's objection was overruled by the presiding Magistrate Effim and tendered the two shirts and trouser as exhibits. 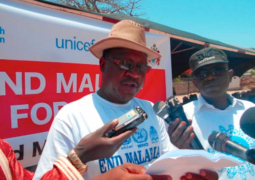