"This is how the birth of Jesus Christ came about:

His mother Mary was pledged to be married to Joseph,

But before they came together,

Can you imagine it? At a time when marital infidelity, or pregnancy outside marriage, was punishable by death - by stoning!

Joseph would not have realised at that time that Mary had become pregnant through the action of the Holy Spirit. However, it was within the nature of Joseph to be merciful and honourable. In Matthew Chapter 1: 19, we read:

"Because Joseph her husband was a righteous man And did not want to expose her to public disgrace, He had in mind to divorce her quietly."

could well be seen as one of the largely "unsung heroes" of all time. Is this not often the way with people of God? God's ways are not our ways; nor are God's thoughts our thoughts - as the prophet Isaiah reminds us (Isaiah 55). Our world is full of "celeb" culture, where the rich and famous are glorified. In God's eyes, the heroes and heroines are those who hear God's voice and strive to do God's will - often in a very unassuming and apparently insignificant way.

Joseph was a righteous man. We are told this in the Bible. He must have lived close to God, and come to know God's ways - even before he was clearly told what he should do. He had decided to treat Mary kindly and mercifully, in what he must have, at first, thought to be her disgraceful behaviour. Joseph had already decided to treat Mary kindly - yet divorce her - when he received a clear message from the Lord. The Gospel according to Matthew tells us:

"But after he had considered this, an angel of the Lord appeared to him in a dream and said,"Joseph son of David, do not be afraid to take Mary home as your wife,because what is conceived in her is from the Holy Spirit.

Being in tune with God and God's ways, Joseph is first able to recognise that the message is actually from God. He is then also able to accept the substance of the message. That is, Mary has not behaved in any way improperly; and the child she carries is of God, and will bring salvation to his people. Each time Joseph heard God speaking to him through a dream, his response was immediate. When he is asked to take Mary as his wife, the Scriptures say, "when Joseph woke up, he did what the Lord had commanded him and took Mary home as his wife" (Matthew 1:24). When the child Jesus is later in danger from Herod, Joseph is warned in a dream to escape. The Scriptures again state - "so he got up, took the child and his mother during the night and left for " in (Matthew 2: 13). When it is safe to return, there is another dream for Joseph with the Lord asking them to return to . Again the Scriptures re-echo his obedient response - "so he got up, took the child and his mother and went to the " (Matthew 2: 21).

This lays a challenge before us in our own day and age. Today we are no less called to seek God and God's will for our lives. To listen for God's voice - a still small voice - we need to really remain attuned in order to hear. How can we do this? Some years ago a grand old parishioner who had been married to his wife for over 45 years told me that he almost always knew what his wife was thinking even before she said it. It should be noted that this can only happen after a sustained and intimate relationship with another - be it a close friend, relative or spouse. It can be like this in our relationship with God. We can deepen our intimate relationship with God in Christ, in many ways: through prayer, meditation and contemplation; through reading the Scriptures; even through pondering on creation; through other people; through service to those in need. Our revelation of God is through Jesus Christ, who very much identified himself with those who suffer. In our turn, we are assured that God is with us at all times - times of both joy and sadness.

It is a great comfort to know that God shares in our times of suffering. Through Jesus Christ, whose birth we celebrate at this time, it has been made very clear to us that our God is willing to enter into the very heart of the deepest human suffering. no doubt had very difficult and fearful times from the time the birth of Jesus was announced, through the flight into and the return to and . But that notwithstanding, was able to hold on to his faith in God, and maintain an acutely listening ear to hear God's instructions.

When we feel God drawing us in a certain direction, can we respond obediently as Joseph did? If Joseph had not been willing to be so used by God in God's saving purpose for the world, the result could have been so different. It is a rather sobering thought. When we fail to respond to God's prompting to undertake some particular action, there is no telling what suffering may result, or who may not be led to God.

This could all be interpreted as a rather daunting prospect. However, we have nothing to fear. God does not call without equipping us for the task in hand. God wants the very best for each of us, and longs to be with us and empowers us for God's purpose here on earth, among God's people. Joseph and others in the Bible are prime examples. They invariably felt inadequate for the task - remember Moses! Faith, love of God and seeking to do God's will - as a part of our daily lives - are responded to by God, who will use us for service here on earth, and bring forward the time when God's Kingdom is fulfilled in our midst.

We give thanks for - an often unsung hero in the Nativity story and the patron saint of the . We give thanks for his part in the protection and nurture of the child Jesus. May we be inspired and emboldened to do likewise in our ready and obedient response to God - to the honour and glory of God.

My prayer for you all this Christmas is for joy and peace with justice in all things. May you increasingly come to know, and be aware, of the presence of God in your lives.

Your friend and bishop, 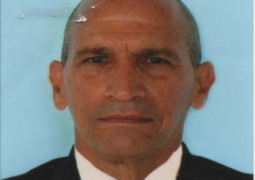 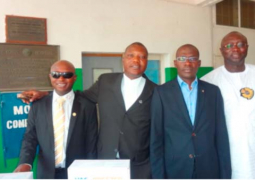 Rotary Club of Fajara out to serve humanity