Choosing to Care - 'The Forgotten Disasters'

At the end of the last decade, I like everyone else made some new year's resolutions. Three months into the New Year and decade, I find myself struggling to keep them, but still I try. I keep asking myself if I am giving my all or whether I could do soo much better if I strove a bit harder and pushed more.

Isn't it amazing how in our own struggles and trials, we, tend to loose focus of the bigger broader picture, one that includes everyone in different capacities? Perhaps in a perfect world, one where things worked as we want it to and we can turn on the TV daily without being crushed by the devastation occurring in soo many places all over the world.

In the course of the last decade, multiple massive and horrendously devastating natural disasters have stuck the world. These disasters ranging from floods to earthquakes, mudslides to avalanches and tornados to tsunami have ravaged. The world looked on with drooping jaws and many wept for the shocking loss of lives and livelihoods.

The flash floods that devastated up state locals is one such sad feat of fate. Other such disasters that gained most prominence include hurricane Katrina in the United States, the Indian Ocean Tsunami, the Pakistani earthquake, the Philippines flood, the Australian and Californian forest infernos and the Haitian earthquake, just to mention a few. We still remember these horrific tragedies vividly with the heart breaking images carved into our minds.

Just last month in Japan, another such tragedy stuck. Thousands of lives were lost and thousands are still listed as missing with the chances of being found alive deemed slim. Legions of homes were destroyed, others damaged and multiple ghost towns lay were thriving neighborhoods once stood, the only signs of what used to be being the debris left behind from the ravages of the torrid waters.

But the most haunting sounds are the cries, the weeping of the survivors left behind to try and scrape together what they can, existing in unthinkable circumstances whilst grieving. Such pain is beyond understanding if not experienced. My heart broke as I was watching a report on CNN on the living conditions of survivors housed in shelters.

As with many such situations, there is initial global concern in the beginning and later on. However, after a while, focus moves on to something else which might have happened. And these become the 'forgotten disasters'. The ones who truly and most probably will forever remember are the victims.

Recently I was speaking to a very close individual about just how the world is soo full of chaos. Some of these we have no control over, the natural disasters, but others we can do quite a lot to prevent or resolve, the primary one being war, which is breaking out and spreading like an epidemic in this world. Sometimes, I think the only truly constant thing in this world is chaos.

When disasters traumatize our sister nations, it is our inherent obligation to help or aid in anyway possible. These people in most cases loose everything including their lives. ‘Helping’ can range from financial to spiritual in the form of constant prayers.

With regards to the former, it is often impossible to physically pack up and go over, or to purchase aid and mail it. In order for the aid to get to the right people, it needs to be channeled through a legitimate aid organization (NGO-these can be found online).They will to the best of their abilities make sure the aid goes where it is needed.

Nothing can turn back the hands of time, undo the done or un-cry the tears. But assistance given and showing that we care can make a lot of difference to the millions who exist in such circumstances all round the world. Remember, life is unpredictable but love can help to heal. Give what you can and pray. 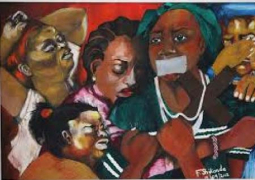