Ali Ceesay, Chief Superintendent of Prison, who was charged alongside former police chief Ensa Badjie, on Wednesday opened his defence at the Special Criminal Court in Banjul before Justice Ikpala.

Ensa Badjie and Chief Superintendent of Prison Ali Ceesay were arraigned at the Special Criminal Court, after being indicted on different counts, including conspiracy to commit a felony, robbery with violence, receiving stolen property, aiding and abetting, robbery, conspiracy to commit misdemeanour, aiding prisoner to escape, official corruption, conspiracy to defeat justice and interference with witnesses, deceiving witnesses, offences relating to judicial proceeding, among others.

In his testimony, Ceesay denied telling the first prosecution witness in the case (PW1) Soriba Condeh, that if he lied against Ensa Badjie, and that he (Condeh) would be abandoned in the cell, adding that, on 5 May 2010, he as the officer of operations was informed in the prisons that PW1 and the 1st accused were not in good terms in the confinement and were raining insults on each other.

“I went to the confinement together with Ebrima Tiyana, who was at the time in charge of the security wing, and his deputy, one Mr. Touray, to address the duo,” he added.

The two officers asked me to transfer PW1 to the main yard to avoid having problems with the 1st accused, but I refused due to security reasons, and that PW1 was serving 14 years in prison, he continued.

He said PW1 was said to be fond of escaping from custody, and it would not be safe if he was taken to the main yard.

“We first met PW1 Condeh, whom we addressed and asked to stop provoking the 1st accused, but he denied provoking him,” prison chief superintendent told the court in his defence.

“We addressed the 1st accused at the security wing and the 1st accused told us that PW1 was insulting him while at the prison,” Ceesay said, adding that this was done together with Tiyana and Touray.

He denied the charges, as well as knowing Fatou Jotou Mendy.

He said he was in charge of the confinement unit at Mile 2 in April 2007, and explained the procedure for escorting prisoners to Mile 2 prison.

“I am not responsible for escorting prisoners. That was the role of the junior officers,” he adduced, adding that he joined the prison in 1988.

He further denied escorting PW1 Soriba Condeh, during Soriba’s detention at the prison.

“I was not present when PW5 was discussing with PW1,” he added.

Chief Superintendent of Prison Ali Ceesay further added that he was arrested on 12 May 2010.

Under cross-examination, the witness adduced that Superintendent Ebrima Tiyana and his officers informed him that PW1 and Ensa Badjie had a problem, which was against the provisions of the Prisons Act.

He added that he called them and advised them, as a reformer and first-time offenders, and warned them saying if they did it again they would be charged.

The witness admitted that exhibit D was his statement, adding that he was the former operations commander at the security wing , but he had never quarreled with the 1st accused; he only addressed him.

He further stated that the 1st accused was treated as an ordinary person at Mile 2.

The case was then adjourned until 29 June. 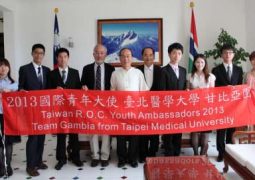