Case of rogues and vagabond adjourned

The case of idleness and disorderliness, rogues and vagabond involving Abdou Kujabi and Lamin Manjang could not proceed recently at the Brikama Magistrates’ Court before Magistrate Sainabou Singhateh.

When the case was called, the prosecuting officer, CPL 2294 Jammeh, informed the court that the police had lost one of their colleagues from the Brikama Mobile Unit and as a result they could not go for the accused persons at Mile 2 Central Prison.

The particulars of offence on count one read that on 13 December 2010, between 5 and 6pm, at the border checkpoint, in Dimbaya Village, in the West Coast Region, the accused persons, Abdou Kujabi and Lamin Manjang, forcefully demanded D3,000, being payment levied on the transportation of timber from Casamance to The Gambia.

Count two revealed that on the same date and place, they mounted road block along the road and therefore obstructed the movement of vehicles, an act which was illegal and disorderly. 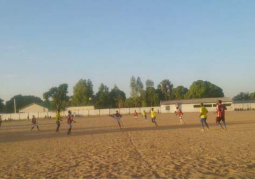