Caravan of Mercy, a charitable organisation registered in The Gambia, last Friday donated medical items to Brikama Major Health Centre, and a modern wheel-chair to a disabled woman in Brikama at a ceremony held at the Governor’s office in West Coast Region.

Speaking on behalf of the Governor, at the presentation ceremony, the Deputy Governor, Madam Fatou T. Sanyang, hailed the efforts of Caravan of Mercy. She described them as “true partners” in development.

According to Sanyang, such a donation is timely, noting that the health sector needs such donations in their services. She pointed out that the government needs other partners in the development of the health sector as it cannot do it all alone

Deputy Governor Sanyang added that the donation is not small as the medical items will benefit many sick people who visit the health facilities. ‘”Your donation (Caravan of Mercy) is very big; we appreciate the donation.”

She commended Caravan of Mercy for the donation, adding, “we recognise your tremendous efforts towards the health sector.”

The gesture, she went on, will complement the efforts of the government in the health sector.

“We are very much grateful to your charitable organization. This is the kind of organization we are calling for day to day in our socio-economic development, as we are all partners to complement each other’s efforts,” she stressed.

Deputy Governor Sanyang assured the donors that the donated items will be put into good use.
Welcoming dignitaries, Caravan of Mercy Overseas coordinator Mr. Pa Modou Sillah said that the Caravan of Mercy organisation is committed to giving a helping hand to the poor and needy.

According to Sillah, the organisation does not discriminate in giving out alms, irrespective of religion, tribe and race, adding that they give their donations based on humanitarian grounds.

Sillah remarked that Caravan of Mercy has been giving assistance to many people in the country.

He thanked Brikama Area Council for their support, since the early days of their operations in the country. Sillah expressed his profound gratitude to the government of The Gambia for allocating a plot of land to Caravan of Mercy in the West Coast Region for the organization to construct its headquarters.

Speaking on behalf of the beneficiaries, Malang Ndong, Chief Executive Officer of Serrekunda Hospital, thanked Caravan of Mercy for the donation.

Alieu Sonko the officer in charge Brikama Major Health Centre also spoke at the ceremony, which was attended by health officials, councillors, and a cross section of the public. 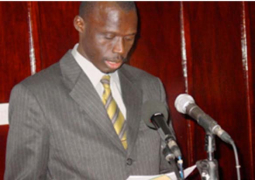