The National Council for Civic Education (NCCE), in partnership with ActionAid International-The Gambia, yesterday kick-started a two-day capacity building exercise on promoting women and youth participation in democracy and elections at the grassroots level.

Speaking at the opening ceremony of the workshop held at Regional Education Directorate 2 Hall in Brikama, Alhaji Sering Faye, NCCE chairman, said it is their mandate to educate, sensitise and raise awareness of people on their civic rights and responsibilities.

He pointed out the various awareness programmes they have had across the country.

He also thanked ActionAid International-The Gambia for partnering with them.

“The country can only develop if we know what our rights and responsibilities are as citizens,” he stated.

Chairman Faye described youths and women as the cream of the nation, saying they are the people that will handle the mantle of leadership tomorrow, which is why they thought it fundament to engage the youths and women in understanding moral values and sound virtues.

The training activity will prepare participants to know what democracy is about, he added, saying one thing that stands out is tolerance.

“We have to be accommodative, respect each other’s views, disagree to agree, but at the end of the day put the interest of the nation first,” he remarked, as he urged participants to actively take part in the democratic process of the country at all levels.

“We have to participate in the development of the country. It is not only enough to say I am a citizen,” he said.

“When we say power belongs to the people, it is not the people that go and decide that this is what we should do, but the power that resides in us is for us to elect who is going to do that for us,” he remarked.

He urged participants to share the knowledge gained from the workshop with others who could not be part of it.

He finally thanked Brikama for opening their doors to them, as well as his staff for carrying out the mandate of the NCCE.

Omar Badjie, Executive Director of ActionAid International-The Gambia, in his remarks, said the two institutions had engaged in various capacity building activities across the country.

Good governance and sound democracy are founded on how well these principles are understood and practised at the household and community level, he noted.

He said the training course focuses on women and youths, because the two categories had been marginalised for a very long time.

Women and youths constitute over 50 percent of the population and contribute in many diverse ways to the GDP of the sub-region, and “yet women continue to be sidelined and excluded in decision making and resource distribution”, he observed, saying the level of political awareness among women and youths “is very low”.

A well-informed citizenry will result in a strong and active participation in national affairs, to ensure the protection of rights and adherence to the rule of law, he went on.

Women’s low participation in decision making processes can be seen at many levels, including their low representation at the National Assembly and local area council level, he further said.

The low participation of women in decision making includes but is not limited to the following, which are poor skills, low literacy level, poor access to information, as well as traditions and values.

Mr Badge further stated: “We have to promote democracy because it promotes empowerment, participation, transparency and accountability to be able to engage critically.”

People living in poverty and exclusion have to take the lead in all these development processes, he added.

Isatou Bittaye, senior programme officer at NCCE, in her welcome remarks, said the workshop was aimed at promoting understanding of women and youths participation in grassroots democracy.

She said the workshop also aimed at looking at the election process and involvement of the public in decision making at all levels, as well as transparency and accountability within democratic governance at central and local level.

“It is important that we educate and sensitise youths and women, particular those at the grassroots, on the importance of being involved in democracy and the election processes,” she went on.

The women and the youths have the ability to eradicate poverty in their communities, Mr Badgie also said.

For development to take place the capacities of women and youths will have to be consistently built, he added.

He described youths and women as important stakeholders in election, and as such need to be aware of these issues in order to be part of the democratic processes and participate effectively in elections. 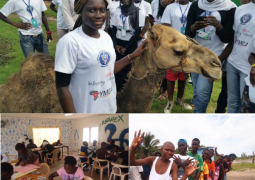