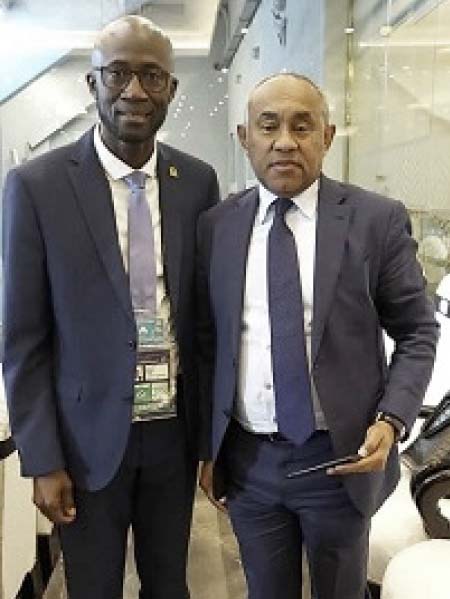 The Confederation of African Football (CAF) has nominated GFF 1st Vice President Alh Bakary K Jammeh as the preferred Match Commissioner to the 3rd Place Play off between South Africa and Ghana in the Total U-23 Africa Cup of Nations in Egypt scheduled for Friday 22nd November, 2019 at the Cairo International Stadium.

This will be Mr Jammeh’s third major assignment as Match Commissioner in CAF’s third highest flagship tournament and will be at the center of a very important third place play off final where South Africa and Ghana are both finalists to the Olympic Games Tokyo 2020.

Jammeh as the administrative head of the said match has a full contingent of CAF Match officials including Uganda FA General Secretary Edgar Watsu as Technical Study Group expert while veteran Egyptian journalist Inaz Mazhar serves as venue Media Officer, Adulcinio Isaac from Angola and Rufin Tolojara from Madagascar as Security Officers. Mr Jammeh’s scheduled has amongst other Officials Boubou Traore of Mali as Central Referee and Moustafa Saloui from Morocco as General Coordinator.

Hosts Egypt and Ivory Coast reached to the final after edging out South Africa and Ghana at the Semi Finals of the tournament. All the four countries have booked slots to the Tokyo Olympic Games in 2020.

Mr Jammeh was amongst officials at CAF that made the decision to shift the Semi Finals from the Al Salam Stadium to the Cairo International Stadium where the tournament final would be staged. Jammeh is increasingly earning himself a distinguished  status at CAF when he entered into the ranks of Committee membership at the CAF Youth categories.